You are here: Home / Bargain Books Under $3 / Stefan of Caeli by Aurrora St. James 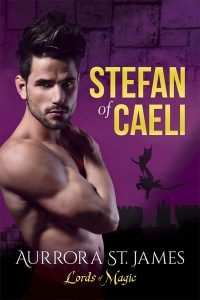 What Inspired You to Write Your Book?
I was inspired to write a book about family, with both the good and bad aspects. My hero – Stefan – is on a quest to find out what happened to his mother who walked away from he and his twin brother when they were children. He needs answers to his past so that he can move forward with his life. Yet my heroine – Isabela – is trying to prove her worth to her family. She is constantly compared to her brother and feels she is not good enough in their eyes. This book is about finding your true worth in yourself and being happy with who you are, regardless of what others think. But at the same time, honoring the people who made you who you are.

How Did You Come up With Your Characters?
Stefan Baudin is the twin brother of Nikolai Baudin, who was featured in the first book in the Lords of Magic series, Gavril of Aquina. I intended to write Nikolai's book first, but Stefan was insistent that they needed the answers to their heritage before Nikolai could find his happily ever after. I began to explore Stefan's quest for those answers, and discovered that he has a penchant for finding trouble. As for Isabela, I knew that I wanted a strong female heroine and I loved the idea of a female warrior. When I dug in to what would make a woman decide to become a warrior, her story began to unfold. What happened next was magic. 🙂

Book Sample
Scraping, like something hard dragging against metal, woke Isabela. Her eyes fluttered open, taking in the rock ceiling and dirt floor of her cell. She felt a cool chill on her face, but the rest of her body was deliciously warm, and she was loath to move. She looked down and discovered the reason for her warmth was the blanket tucked around her. Isabela smiled. Her last memory before finding a healing sleep was of Stefan spreading his blanket over her. Holding her through the bars to share his heat.

She closed her eyes, savoring the memory. That muscular forearm draped over her stomach, so close to her breasts. Through her pain, she’d wanted him to slide that hand higher, but still accepted the warmth and comfort he offered. Instead, it touched a part in her heart that she hadn’t known existed.

Isabela’s breath caught as the thought fully formed. No! She couldn’t fall for him. His kindness to her after her pain couldn’t affect her reason for being here. That kiss! Oh goddess, that kiss which had torn apart her soul and put it back together again, forming a new Isabela, couldn’t happen again. Stefan made her forget her goal. Something drew her to him fiercely and she had to push that away. Push him away when the very thought of his kiss made her head swim and her body burn with desire.

Isabela took a deep breath and let it out. Stefan was simply a strikingly handsome, honorable man. One among many. Once she was Keeper and mated to Valko, she would forget him. Ignoring the sharp pain in her heart at the thought, she solidified her purpose. She had to gain her father’s respect. She ached to talk with her father as they once did. To see him smile at her. To be noticed by him. Only by befriending Stefan and learning his secrets could she do so. She hadn’t lied when she said she wanted to know him.

She opened her eyes as the scraping sound echoed through the chamber, drawing her from her thoughts. What was that? She took stock of her surroundings once more. The cell smelled faintly of earth and rabbit stew, making her stomach ache.
Isabela huffed. Everything ached, if she were honest. The healing sleep healed her wounds and broken bones, but the pain had yet to fade. Once Andrei took her to the next chamber, she’d reminded him that he wasn’t to treat her as a fellow member of the Guard.

Andrei had grinned in wicked delight and punched her with all the force of his dragon. He beat her with abandon, all the while telling her that a woman didn’t belong in the Guard. She should be at home with other women, finding a mate. That angered her as nothing else could and she swore at him, calling him every name she could think of. The hours that followed were filled with pain and anger as she and Andrei faced off.

Isabela turned to her back, feeling soreness in her arms and legs. She never should have provoked him as she did. He would be no less easy on her from now on.

She lifted her head. What was that sound? Isabela searched the dim chamber until she found Stefan. He crouched before his cell door, his hand at the lock. The noise seemed to come from him.

Gingerly, she sat up and pushed the heavy fall of dark hair out of her eyes.

He glanced at her, shadows lingering in his green eyes. “’Tis good to see you awake.”

She nodded. “What are you doing?” Peering closer at his hand, she thought she saw something shiny and black. Her mind scrambled, trying to make sense of what she was seeing. Her brow furrowed. It looked like… but no, that was impossible. “Stefan?”

Stefan cocked a silky, dark eyebrow at her. “You don’t plan to spend the rest of your days here, correct?”

“No, but…” How could he have a claw coming from just one finger? A claw that looked like a dragon’s talon. Impossible, but she was sure… no one could shift just part of themselves. Could they? What was Stefan?

She opened her mouth to ask. To demand an answer for what she was seeing.

“I will get us out, and you will take us through the passage you used the night you brought me bread. I will take you from this place to somewhere safe,” he said.

His deliciously dark voice rumbled in the small cavern, washing over Isabela. She shivered, the resolve she held moments ago to push him away sliding off her like water.

He glanced her way, and Isabela sucked in a breath. The heated look he gave her sent warmth pooling in her lower abdomen. His eyes skimmed from her lips down to her breasts, lingering. Her nipples tightened and her blood heated to molten levels.

“Somewhere we can recuperate, rest,” he said.

It was clear that “rest” meant something else entirely to the handsome warrior than it did to her.

Dear goddess, he was potent. Every cut muscle of his body called to her like a songbird. Beckoned her to explore him, learn him as a woman would.

“Yes,” she said, licking her lips.

Stefan stood and stalked to her, his eyes locked on her mouth and burning with lust. He crouched before her. “Yes,” he said, his dark voice husky. Taking her hand in one of his, he tugged her forward until their lips were a breath apart. “You will spend time in my bed.”

“What makes you think I want to?” she asked, trembling as her lips brushed his with her words. She couldn’t resist teasing the dark, sexy man. Especially as it kept her mind off a path she was afraid to look down. In seventy-eight years, most of which were spent training and working alongside the men of the Guard, no one had drawn her interest or passions. Stefan changed all of that. It frightened her.

His lips tugged up as he closed the scant space between them and nipped her lip, then licked away the sting. “You can’t resist me.”

Isabela laughed. She couldn’t help it. “You think you’re that irresistible?”

Finally, after what seemed like ages, Isabela got the full, sexy smile she’d wanted from Stefan. His teeth were straight and white, and those full lips spread and curved. His eyes twinkled devilishly and he winked at her. “Just try to resist,” he whispered.