You are here: Home / Epic / Song of the Fairy Queen by Valerie Douglas 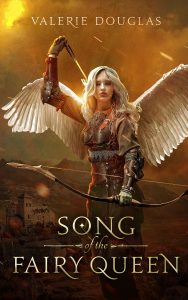 How Did You Come up With Your Characters?
I knew from the moment I started writing her that Kyri was going to be all fairy, beautiful, wild, flirtatious, and a kickass Queen. High King Oryan was a good man determined to be a great King, until his half-brother decides he'd be a better one. Now Oryan has to regain his throne with only his High Marshal Morgan, and Kyri at his back. Morgan is a great character, a hero by choice not by chance, a more than capable general determined to serve his King and friend if it kills him. Kyri both exasperates and enchants him, who can hold her own with sword and bow.

Book Sample
An invader leaped at Oryan but the King – no slouch with a sword himself – cut the man down on the fly with one quick swipe of his longsword as those of Morgan’s men behind him joined the battle, too.
Then they were past. Not a single invader survived their assault.
Distantly to their rear they could hear the sounds of running men coming toward them. Boots clattered. There was the crash of doors being kicked in, as they searched, and then shouts of frustration and fury. Searching. Not theirs then.
Pain pierced Oryan’s heart. Gwen? If they had come so far…then she had fallen…
Grief nearly swallowed him. His beloved Queen, his Gwen, was gone.
Forever.
For the sake of their son, he kept moving.
They raced up the stairs of the circular tower, desperate to reach the top before Haerold’s men reached them…before his magic found them.
Below on the stair came the sounds of battle, the clang and clamor of steel on steel, the grunt and groan of men in combat as Morgan’s men held the door. They hammered the invaders back and back, slammed the door shut and barred it quickly. It wouldn’t hold long.
They burst out into darkness as the wind whipped at their hair, their clothes, as it battered at them.
Far beneath them in the courtyard below, the castle Guard fought a hopeless battle. Steel rang on steel, metal crashed on wood… Light flashed luridly, greenish and unnatural… dark magic… Men died in the roar of those flames…Shouts, screams and desperate cries filled the air clearly even so high above.
Oryan looked up to the black night sky to find it filled with gossamer wings…

A slender figure dropped to the parapet, crystalline wings flaring, a cascade of golden curls shimmering down over her shoulders to nearly her waist. She wore only a simple shift that showed signs of battle. That shift clung to a slender body with ripe curves at breast and hip, to flutter about shapely thighs. Blood stained it, some of it her own to judge by the rent in it. A sword belt hung on those curved hips, a bow at her back between her wings.
So they had been surprised, too.
Torchlight illuminated the fine, amused features of her face, the large liquid eyes…
Morgan’s breath caught.
She was beautiful as only Fairy were or could be… mischievous, fierce when necessary and wild.
Her bare feet touched stone with a soft patter barely heard above the wind.
Morgan looked to his King.
Looking up, Oryan was clearly astonished, no more than Morgan, he’d scarcely dared to hope for help, but not that Kyriay, the Fairy Queen herself, would come.
“What would you, Oryan?” Kyriay cried over the sounds of battle still going on below, her voice soft, but clear and strong. “Haerold’s forces attacked mine too. I heard your call.
So we came, thinking you might need aid.”