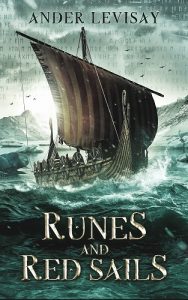 Aelfhild always tried to keep her world small. She served the future queen; she did her duty. She kept quiet. But the world had other plans.

When the assassins came for her mistress, there was only one choice: run. Swept into a world of longships and bloodthirsty raiders, of sky-splitting storms and heaving seas, of old gods and treachery, Aelfhild has to find her footing—and fast. She’ll tangle with scheming lords and stand alongside stoic shieldmaidens. She’ll raise a mug with drunken warrior-poets and set sail for unknown lands with a crew of restless misfits. It’s going to take all the strength and courage she can muster. And more than a little luck.

This is her story.

Runes and Red Sails is the thrilling first installment of the Queenmaker series, an epic fantasy adventure set in a world influenced by Scandinavian and Old English mythology.