You are here: Home / PermaFree Fantasy Books / Through The Storm by Sherif Guirguis 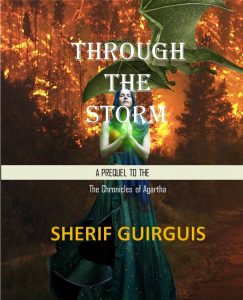 Rowida is a young woman with grand dreams, on a path that would touch two worlds, and span one hundred years.

Once back, she raises an army the Inner Earth had never seen the likes of and starts the first global war. Thousands of lives are lost, nations and races cease to exist, but Rowida has just begun a far longer story.

What Inspired You to Write Your Book?
The legend of inner earth and all the theories around it intrigued me, and when I went deeper in trying to understand it, I found a connection to the green children of Woolpit.
This triggered my imagination to weave this story, which I hope will bring some joy to others.

How Did You Come up With Your Characters?
Since it is a series, I spent some time trying to fit the world I built to the already existing legends, this created the central character, Rowida, then the rest came to balance her out.

Book Sample
Rowida passed the next two days in preparation, She was lectured about the political structure of the world above. From the most recent reports, it was a warlord’s dream come true as it was explained to her.

Women were not treated with the same equality and reverence as they did here, but they got through with life, holding important roles in society.

She was given parchments to help her start to understand the tongues used there, something that would have not been needed if she retained her aura with its Vrill to understand the languages of others. She was also given a pack of clothes, as they told her the sun of the surface is harsher, yet the winters are far colder than in Agartha.

She laid in her bed, silent, trying to pull sleep to her aid, but a year and a half of being used to sleep due to extreme exhaustion didn’t help. She turned around in the bed until she was facing the ceiling, then she sat up and pulled the bound parchments and read for a time.

“Hello, Rowida.” A voice from her left made her jump out of bed.
To her left, a woman of around middle years stood with a smile.
“Who are you? And when did you enter my room?” Rowida felt the vague sensations of anger almost catching her in its grasp, then it was gone.”

“I am someone who is interested in helping you.” The woman moved slowly towards the end of the bed and sat. “As for how I entered your room, doors and walls represent nothing to me and to my people.”

Rowida gaped at the woman’s declaration, then a far remote memory clicked in her head, something from her studies in Nafoura, a lifetime ago. “You are one of the Others,” Rowida said in a low voice.

“Indeed, this is what your kind calls us,” The woman smiled radiantly. “I get it that you also know of our deals?”

“No, never heard of any deals.” Rowida sat next to the woman, and for a second, as she adjusted her posture, her hand passed through the ethereal being beside her.

“Well, if you were a yellow, you would have heard about our deals,” the woman said.

“I am not interested.” Rowida laid on the bed. “I have no aura to benefit from your deals.”

Although the woman was ethereal and earlier Rowida’s hand went through her as if nothing was there, she reached and firmly pulled Rowida from the bed.

“This is precisely why I came to you.” The smile on the woman’s face disappeared and was replaced by a grim and serious tightened lips. “I am offering you a deal where you will not only get your aura and Vrill back, but you will be one of the greatest figures in Agarthan history, a feared conqueror and a formidable army commander.”

Something old and dark stirred in Rowida at the woman’s touch, scary and rotten, but for Rowida, it was better than the void in her heart.

“Alright, tell me of your deal.” Rowida sat straight on the bed. “But first, what is your name?”

“You may call me Miss Violet.” The smile returned to Violet’s face, ten folds more radiant.

“I understand the deal now,” Rowida scoffed. “And I think it is very strange, you get a part of a soul which I don’t have, in return for giving me back my soul.”

“Exactly,” Violet said as she produced a wooden looking card from her dress. Surprisingly, it was solid through and through. “And now all you have to do is place a drop of your blood on the contract and it becomes binding.”

Rowida took the card from Violet’s hand, turned it over to check the other side, and all she saw was the intricate design engraved on it.

“This contract has no writing, only designs.” Rowida kept turning the card in her hand. “And it looks like a tarot card, only without a face.”

“It is a destiny card, for you and for me it is our binding contract.” Violet smiled radiantly as she eyed Rowida, rubbing the card over and over. “As, for the writing, it will only appear after the signing, if the writing doesn’t match what I said, you can just immediately nullify it.”

“How can I nullify it?” Rowida stopped fiddling with the card and stared at Violet intently.

“Using another drop of blood.” Violet kept her smile, beaming at Rowida. “But you have to know this, if you don’t nullify it within one hour of signing it, it becomes binding.”

“So, I have a single hour to decide on such an important matter?”
A thrill ran through Rowida’s body, to be gone in a moment, then she grabbed the corner of the card and pushed it against her thumb. “I like having some thrill in my life.”

As soon as Rowida’s blood touched the corner of the card, it started to grow in her hand till it reached the size of full-sized parchment, and words started to draw themselves on it.

In less than a minute, the whole face of the wooden parchment was filled with the wording of the ‘Deal’.’

Rowida was well versed in trade treaties and contracts. She had aspired to find a future in rulership, and as she read the contract, it was exactly what Violet said. She nodded her approval and said, “I don’t need an hour, it is good, at least as far as I stand, a soulless woman.”

“Good, now listen.” Violet had a hungry look in her eyes as she approached Rowida. “There is a lot to be done before they send you to the surface.”