You are here: Home / Buyer's Guides / The Moon Rogue by LMR Clarke 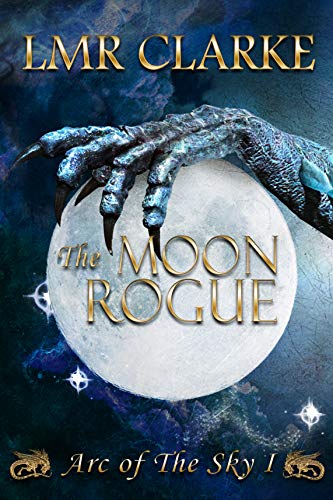 The Moon Rogue by LMR Clarke

Join Emmy on her journey from humble and abused apothecary’s apprentice to lynch pin in a plan to save the world from ‘Dark’ magic in this fantastical coming of age story.

Prince Mantos, rightful heir of the Masvam Empire, is murdered to allow Dorai, the Dark Goddess, to seek ultimate power.

However, all is not lost, for Mantos has died once before and mysteriously returned from the dead.

Into this tumultuous conflict steps Emmy, a slave who escaped captivity, only to be enslaved once more. Recognized by the healer Rel, who shares Emmy’s unusual skin coloring, as a descendant of the Uloni, a race brought forth into the world by the daughter of gods, Emmy may be the key to returning balance to this world.

Enemies become friends, and lovers become enemies as the battle lines are drawn in a desperate struggle to save the world from Dark Magic.

The Moon Rogue is a must read for fans of Leigh Bardugo, Emily M. Danforth and Samantha Shannon.

What Inspired You to Write Your Book?
I wanted to write a book that was full of great characters, unique worldbuilding, and kick-ass action. This is a book that allowed me to explore themes of family, friendship, and gender, as well as creating a safe space for LGBT readers. LGBT themes are present, but they're never the main source of conflict.

How Did You Come up With Your Characters?
My characters are inspired by emotions we all have. Emmy is a representation of strength. No matter how hard her life is and how heavy the burdens placed on her, she keeps going. Mantos Tiboli, imperial prince of the Masvam Empire, has everything he ever wanted, but he doesn't want what he's about to get: the crown. He's inspired by the part of us that fears responsibility. His brother Bandim is inspired by the desire within us all to be accepted and wanted. While his actions are unforgivable, we understand why he carries them out.

Mantos Tiboli, Imperial Prince of the Masvam Empire, was heir to the throne by a hairline crack. Two eggs had rested in two divots, on two identical stone pillars. Identical wrought-iron branches curved around them, rising into tall spikes surrounding the leathery spheres. Everything the same, everything equal, both eggs cared for the same way in the same warm air. It was a miracle, something unheard of, even in the annals of time. Never before had two eggs been brought into the world together—not since the time of the gods themselves.

Armed guards and males of the household watched over them. They stared, eyes never leaving the leathery shells, waiting for the blessed moment when the future emperor would hatch. But which one would it be? The larger egg, black dappled with gold? Or the smaller one, silver and smooth and glinting in the candlelight? It was rumoured that courtiers and potwashes alike took bets, though if any were caught, it would mean their heads. To bet on the future emperor was shameful, but the glint of coin was too great a temptation.

Mantos emerged from his silver egg first, all razor claws and stubby tail, golden eyes glimmering. His first sight was a joyful smile, and the first sound he heard a whoop of joy.

After the briefest of moments, brother Bandim escaped from his black and gold shell, too young to see and hear that the joy was less for the second hatchling. The spare.

It was only by virtue of that brief moment that Mantos found himself standing at the edge of his father’s bed, twenty-one cycles later, on the cusp of becoming emperor.

Bandim lingered further away, cloaked by shadow. He stared at their dying father, unblinking.

‘Will he wake again?’

Mantos paused before he answered. The truth stilled his tongue, until duty bade him answer his brother.

For the longest time the brothers stood in the lavish bedchamber, watching the erratic rise and fall of their father’s chest, listening to the rattle of his breath and the spluttering of the candles. This was the same bedchamber they had been hatched in. It was the bedchamber that would become Mantos’s upon his father’s death.

And what then? Mantos thought as he fingered the fine embroidery of the bedspread. His claws passed over the scenes picked out in golden thread. Conquests, killings, triumphs. His stomach lurched. Soon the crown will fall upon my head, as will leadership of the largest empire in the land… An empire that swallows everything in its path. An empire that I want nothing to do with… His eyes flicked to Bandim. But an empire I must command. The alternative is unthinkable.

Until losing his speech three days before their father, Emperor Braslen, had still commanded his advisers, poring over crinkled maps servants brought to his bedside. He was still talking strategy, showing Mantos the next steps in his grand plan.

‘We will break the Metakalans once and for all,’ Braslen said. Despite the wheeze in his voice and the tremble in his hand, fire blazed in his eyes. ‘Too long have they held out against us. Now that the Selamans have been crushed, we can focus our attention on Metakala—but do not forget, we must leave enough military might in Selama to quell any rebellion. We will roll our borders into Metakalan lands, and then, we will strike against the Althemerians. Metakala is nothing more than a stepping-stone to our true quarry. The Althemerian queen disrespected me twice: once when she denied my marriage offer, and again when she would not marry her daughters to my sons.’ The fury in Braslen’s eyes made Mantos want to step back, but he held firm. Braslen snarled. ‘We will crush them…’

Dutiful, the prince listened and nodded at the right times. He knew the Selamans had been crushed. He had been there. He planted the Masvam flag in their capital. He torched the banner that once hung in their ornate long hall. He slit the throat of the queen beneath its flaming remains. Crushed wasn’t even the right word. Decimated was closer to the mark. Crops and shipyards set alight in white-hot flame, cities brought to ash and ruin, females and younglings trampled to death on the streets… And for what? Mantos thought. Land? Power? He suppressed a snort. More like rebellion. More like death.

As always, he dared not share those thoughts. Once, he had a confidant, but… Mantos shuddered. Fonbir and I dare not communicate about these matters any longer, he thought. Princes on opposing sides of an impending war… It is not prudent, as much as my heart aches for him.

An obedient son, Mantos always played his part. He was a scholar, a diplomat and most importantly, a warrior. It was expected. The heir to the Masvam throne, he could be nothing else. No matter what the Metakalans or the Althemerians or the Linvarrans might believe, he thought, the Masvams saw their males as soldiers, protectors, while other cultures denigrated theirs. Males were nothing more than simpering pets to them, those lands with queens and empresses. That was why they resisted Masvam rule with blood and steel. They saw Masvam ideals as dangerous, against the natural way. But how could that be? The Masvams followed the Light and did as the goddess commanded. We inhabit the holy words, where the male is power and strength, Mantos thought. They live a lie, where females are leaders and warriors. It is against the natural way. Our way is the natural way.

Mantos sighed and dropped the hem of his father’s bedspread. Bandim came a little closer, his face lit by the fine white candles their father favoured.

Like Mantos, Bandim had a fine figure. They were tall and wiry, strength without bulk, and favoured their mother’s colouring. Their skin was a deep brown, their armour—thick scales running in patterns across the body—was burnished gold, with straw-like head fronds straight and black as night. In the light, Bandim’s eyes were opalescent yellow— just like Mantos’s. Both princes were adorned with jewellery: rings, bracelets, and a fine gold chain that wound around their curving horn crests, dripping with coloured stones. But their robes were black, a sign of respect for their dying father.

Soon they would wear white. White to help Braslen’s spirit find its way to the temple, then to the Light.

Bandim fell in beside Mantos and clasped his sharp claws, polished to fine black points, against his flat stomach. His horned tail shifted, the thick bulk lying against the fine muscles of his legs.

‘He doesn’t have much time left. His life’s thread is ready to snap.’ Bandim said. There was a pause. His tone shifted. ‘You will continue with Father’s plans, won’t you?’

It was phrased as a question, but said as a command. You don’t care that he is passing into the Light, Mantos thought. All you care about is the opportunity it brings for you, brother. You’ve never hidden your disdain. Don’t try to, even now that he is dying.

Mantos drew himself to his full height, the scales of his neck unfurling. They widened like a golden ruff, licking at the periphery of his vision. He stared at his brother. Hard.

Bandim twitched his tail and raised himself to meet Mantos’s eyes. His own neck pulsed, the scales unfurling in a mirror image of Mantos’s.

‘Words are words,’ he said, speaking with the wise and confident tone that had fooled many housemasters and teachers. One quality Bandim had in abundance was intelligence, even at the cost of kindness and compassion. ‘You can speak them and still not believe them. I know you’ve given him your word.’ He drew his scaled brows low, raised a claw, and pressed on Mantos’s scaly chest plate. ‘But the question is, have you given him your heart?’

‘Do not presume to touch me, brother,’ he said.

Bandim chuckled, though it was a mirthless sound.

‘Do not presume to act as if you are already the emperor,’ he replied.

With deliberate slowness, he withdrew his claw. When he smiled, his sharp teeth glinted. His face, so like Mantos’s own, was patterned with scaled armour, his eyes deep-set and golden. His brows were fine, his mouth lined at the corners. It was like looking in a cracked mirror, the features similar and yet in some way distorted. He wished they were more different than alike. He despised how similar they looked, being such opposites. I am of the Light, Mantos thought, and he dwells in the Dark.

His neck scales did not retract until his brother stepped away.

‘Leave,’ Mantos said, turning back to their father. ‘I want to be alone with him.’

Bandim lingered for a moment, then gave a shallow bow. He turned, robes whirling, and was gone.

Alone, Mantos listened to his father’s shuddering breaths. He brushed a translucent frond from Braslen’s forehead.

‘I fear my brother will not obey me when you are gone,’ Mantos whispered. ‘What shall I do then? How can I command an empire if I cannot keep my own house in order?’

His father did not reply.

About the Author
Please join this author’s email list
For joining the author’s email/newsletter list you will get:
Free short story.