You are here: Home / Bargain Books Under $3 / Snow Blood Season 1 by Carol McKibben 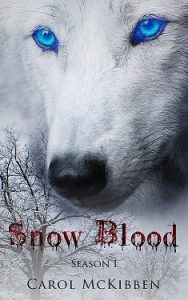 What Inspired You to Write Your Book?
I am dedicated to dog rescue. I had just fostered and placed a beautiful white husky named Snow into a forever home. In a conversation with my publisher, I shared how much I loved vampire stories but that I was frustrated because none of them satisfied my need to know how the first vampire was created. She suggested I write it. I decided to write it from the eyes of a white husky named Snow. Because Snow becomes a vampire dog, I renamed him Snow Blood.

How Did You Come up With Your Characters?
I went to the Vampire Bible to determine how the first vampire was created. Ambrogio was his name. I shortened the name to Brogio. He was an Italian adventure who visited the Oracle of Delphi and fell in love with Selene, a virgin handmaiden in the temple. They, along with Snow, the dog, were the obvious characters.

Later, in the series, I create other characters, such as vampire hunters called Kresnicks; a white witch named Seth, and a Titan named Hecate.

For joining the author’s email/newsletter list you will get:
A free ebook of Luke's Tale