You are here: Home / Bargain Books Under $3 / Redemption by Laxmi Hariharan 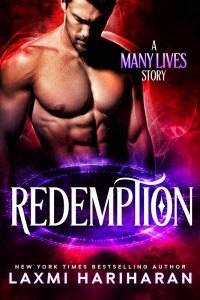 “One of the best books I read this year. A tightly-woven tale of loss, pain, and recovery–and of what it means to forget oneself, to be redeemed by love ★★★★★ ” – Margo Bond Collins, NY Times bestselling author.
“Really, really, damn good. I am undone by the raw emotion that pours through this book.” – Teri Hicks, reader

“Loved it! Made me hungry for more. Am going to read ALL the other books in series!” Elizabeth Peacock, reader

From New York Times bestselling author, Laxmi Hariharan, comes Redemption, the much anticipated next standalone story in the Many Lives Series. For fans of Nalini Singh and Christine Feehan. Experience a thrilling paranormal romance where shifters, vampires and immortals fight to save their love and their race.

LEANA
I submit to no one—not even him. Not till I was taken
Now a terrible emptiness tears me apart. For,
he’s just…gone
Cast adrift, I’m alone in the dark
Will I see him again?

MIKHAIL
I never needed anyone
Then I met her, a cage fighter, my shifter. Mine.
The one I must protect
Through many lives have I searched for her
Now I want her. In my life, in my blood.
Her, only her.

Reclusive designer Mikhail Anton blames wolf-shifters for his memory loss, refusing to accept the signs that he is immortal. On meeting Leana Iyeroy, a female cage-fighter and shifter, Mikhail is drawn to her in ways he can’t identify. And when vampires threaten Leana, he must acknowledge his abilities to rescue her from certain death. They must team up to save their city–before their differences destroy everything they love.

Each book in the Many Lives Series is a standalone

What Inspired You to Write Your Book?
This is a standalone in the Many Lives Series. I have been building this world since 2011. Started with Ruby and Vikram's story. One impulsive act from Ruby, wiped away Bombay to give rise to this new world.

Now its a world full of shifters, vampires and immortals.

Embark upon a perilous and epic journey as Ruby Iyer and Vikram Roy uncover the secrets of the city—and the demons of their past.

The Many Lives Series is an epic paranormal action-romance series that traces the origin and love stories of one woman's illegitimate descendants; all united by the power of her infamous sword.

How Did You Come up With Your Characters?
About the Many Lives Universe
In 2014, Ruby Iyer harnessed the power of an ancient sword. She triggered killer storms that wiped out Bombay, among other cities.
By 2060, Bombay rebuilt itself to become the shining hope of the East.
Meanwhile economic depression has forced many to migrate towards this beacon of prosperity.
Shifters and humans once at odds, now co-exist in Bombay. Both united by their hatred for the rules that the Council of Bombay imposes on citizens.
The Council's goal: economic progress.
Bombay has also attracted vampires. Lethal, powerful creatures led by the scientist Daniel Winter. Daniel wants Ruby's sword so he can harness the forces of nature to do his bidding.
The same sword that Ruby's descendent, Leana Iyeroy has in her possession.
Leana is the first wolf-shifter in Ruby's bloodline. Mikhail is the first of the Ascendants: a group of immortals whose mission is to help humans defeat evil.
Redemption is Leana and Mikhail's story.

Book Sample
I lean closer and let my nipples graze his chest, to be rewarded by a plume of heat rising off him. Sweat sheens his skin now, and when I raise and lower myself on him, he bucks against me.
He tries to raise his hands once more and again I push them back. He's still holding back, still not giving me what I want. I pull at him through the mating bond.
"Say it," I growl. My wolf comes close to breaking the surface, and I leash it back, pull it in. Hold it.
"What?" he asks, his voice hoarse, wary.
"You know what," I gasp.
His eyes fall to my lips, and I know he wants to kiss me, wants to thrust his tongue right inside me. It’s like he's touched me without physically doing it and when he pulses heat inside me I almost come again.
Biting down on my lips, nails digging into his skin. I mark him. Push him one last time. "Say it, dammit." I swear aloud.
The green bleeds out of his eyes, leaving them so clear that suddenly I see him, see through him. See our futures entwined in the depth of his soul.
"Say it, Micah," I move against him. Flex my inner muscles around him. Bleeding light and longing, and this fierce need to own and be owned. I push all of it at him through the shared bond.
He gasps aloud, then swallows before whispering. "I'm yours," he says. "Yours."
His voice is hoarse, subdued.
I don't feel triumphant, just broken. It feels like we've both crossed a line except I don't even know what that is. I lean in and kiss him, lips clinging to him, even as I hear voices rumbling in the distance.
Pushing away the intrusion, my attention coming right back to the male beneath me. Then he thrusts into me again. His tongue tangles with mine and I am lost, till a cry in the distance cuts through the haze in my head.
Mikhail too must have heard it, for he goes still.
Another cry, shut off abruptly.
Aki!
Aki's in trouble. My eyes fly open. Before I can react, hands grasp me, pulling me away from my mate.

Buy this book in eBook or Print format On Amazon

For joining the author’s email/newsletter list you will get:
Free starter library including book 1 in series