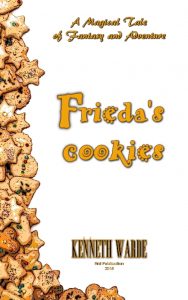 In a strangely-shaped world far away, lived a little girl in one of the many towns of the Kingdom of Melanion. She’s like any other growing child – loves cookies, plays every chance she gets, and curious about a lot of things. But there’s one distinct difference which sets Frieda apart. Unknown to her, the magic of an entire world considers her as a friend.

And that has never happened before.

(Half of the net proceeds of the ebook and paperback versions of the book will be donated to an Asian foundation caring for poor children with cancer.)

What Inspired You to Write Your Book?
I started writing in 2017 and started with epic fantasy. It was a hobby driven by a desire to share stories in the genres I grew up with. Then sometime in the middle of 2018, I decided to try writing a fantasy tale for children. Just in time for Christmas. There will be other books narrating Frieda's adventures. Once I find the time to write them.

How Did You Come up With Your Characters?
Out of the blue. Noisy, demanding, and insistent on being written. Seriously, I am of the "pantser" school of writing, the direct opposite of the structured story style of writing. I let the story go where it wants to go, and, more often than not, in a totally unexpected direction. It makes writing an enjoyable and surprising experience.

Book Sample
In a universe not found on any map of the stars, but rather existing in the imagination of the young and young enough, was a world. A beautiful planet like ours, with oceans of blue, and lands of brown and green, caressed by the cottony shapes of white clouds. From time to time, one could see the turquoise eyes of storms being formed and the silken strands of vagrant clouds sweeping across the vast seas, their individual journeys quite separate from the large clumped, silky masses of their brothers and sisters.

Shh…don't tell him that, though, will you?

He's not happy when he realizes that what he thought was right, was wrong. Some people are like that, but they'll eventually realize their mistake.

Now… wait; about the form of the world? That's a story for another time. We'll get there, don't worry. Oh, there's your disappointed face again. I'll give you a clue instead—it's not a round world. Remember, all things, including answers, have their time and place.