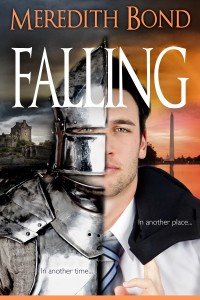 In another time…
Boundless blue skies. Oblivion. The pull of the sky through the wall of windows in Erin Freyn’s new apartment is as enticing as it is disturbing. It seems to call her to step out, to let go, to surrender herself into its terrifying embrace. But when she turns to a hypnotist for help, she never dreams it will uncover long-hidden secrets – of ageless magic and forbidden romance.

In another place…
David Elder is trying to live up to the memory of his brother, who died while working with inner-city kids. He couldn’t save his brother, but perhaps with his magic he can save another. When he hypnotizes Erin to seek a cure for her fears, they discover instead an ancient connection. In a past life, he was a medieval knight and her illicit lover… before things went very wrong.

Today…
Fate has given them a second chance. Will they take it and finally find happiness, or will they be doomed to replay history yet again?