You are here: Home / Epic / Crown Prince: Book One of New Blood by W.D. Kilpack III 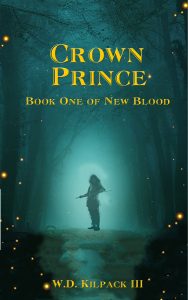 Book Sample
"You!" Neils gasped, incredulous, his voice breaking. "Anyone but you!"

"Your disappointment will not last long." Natharr struck, sword starting high, then altering course to slash almost straight down, each motion mechanical, automatic from years of training. Neils made to parry the high stroke, then followed the downstroke, partially blocking it. Natharr's point sliced through the edge of the captain's thigh, pushing down the metal plate that had been intended to protect it, spilling bright red on the hardwood floor. The captain's eyes widened as his leg sagged, no longer able to support his weight. Natharr's sword whipped back up, then stabbed straight toward the other's throat, efficient as a striking adder. Neils twisted at the shoulders and snatched at the blade with his free hand while he fell, his leg buckling under him. His grip on Natharr's sword blade held, his arm trembling while his skin paled. Red ran in a thick rivulet from his hand down the blood gutters on either side of the blade.

"Why …?" Neils scarcely whispered, staring up at Natharr. A tendril of bloody blond hair peeled away from his brow and fell away. "Gods have mercy on you, Guardian. Your Sight is true — I hope you have read it rightly."

Natharr did not so much as blink as he yanked back on his sword, and two of the blond man's fingers fell to the floor, blood spurting into the air. At the same moment, Neils lunged forward, yelling, "Valane!" Natharr twisted at the waist, evading the stab meant for his heart, and sunk his own sword point into the side of the captain's neck. There was a pained cry — a woman's voice — from behind him. Neils toppled toward the ground, sword clanging as his dead fingers released it. The fresh corpse's weight pulled at the Guardian's sword until he lifted the pommel and the body thumped heavily to the hardwood.

Natharr lifted his newly bloodied blade, face neutral, then he blinked, cold expression melting away as he turned. Darshelle was there, back bowed forward and arms clenched protectively over the baby. A wide slash across her back ran from one shoulder blade to the other. Red already rolled down from the cut in thick rivulets, brightly soaking her white shirt. Had she not turned to the side to cover the baby with her body, she and Vikari both probably would have been run through.

Voices rose all around them. He was not sure if all had gone silent to watch the Guardian of Maarihk fight the captain of the guard to the death, or if he simply had not heard them when enveloped in the melee. "Demons of Chaos!" he roared, catching her elbow and dragging her forward. "Stupid woman! I told you to go!"

"You did not try!" he yelled, kicking the door to the kitchens so hard that it came free of its hinges — then he understood. Two bearded men were there with bloodied axes. Two of Valane's soldiers were there, as well, on their knees. Their bowed heads rose as Natharr entered and the axemen lifted their weapons.

"Lord Natharr!" the two men gasped, seeing the blood on his sword. The relief in their voices was a physical blow.

"I tried," Darshelle repeated, but her voice was weak.

Natharr glanced at her. Her skin, normally dusky to the point of being the color of copper, was much more pale. His emerald gaze returned to the men he had surprised. The axemen were afraid, both stepping backward. Valane's men were smiling, despite blood soaking one's sleeve and smearing half the other's face.

Natharr crossed the kitchen in two steps, dragging Darshelle with him, threw open the door to the cellar and was through. He bolted the door and headed down the stairs before anyone even raised a cry of alarm. He wanted to take the steps two or three at a time, but Darshelle was fighting him, both because she could not see, and because she was weakening. He could tell by the way her resistance declined with each step.

"You killed him — her — them both!" she finally managed, then lost her footing. She screamed, but Natharr kept her on her feet with his free hand.

As if in response, he heard a cry of pain above and a wild voice crying, "Nathaaaaar!"

Links to Purchase eBooks
Link To Buy Crown Prince: Book One of New Blood On Amazon