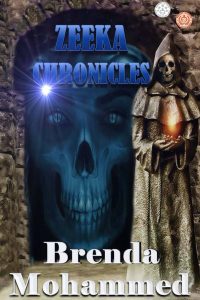 Looking to read a mind-blowing, bold, and original ‘other world’ book to capture your imagination?
ZEEKA CHRONICLES: REVENGE OF ZEEKA by Author Brenda Mohammed, a multi-award winning science-fiction novel inspired by the recent scare of the zika virus, set in the year 2036, where zombies and robots take centre stage, will blow your mind.
It will take you on a futuristic journey into the year 2036.
The highly imaginative tales within would keep you spellbound.
How can one man misuse science for revenge?
Prepare to hold on to your seats as you may have to dodge high tech weapons and shrinkenators.Don’t worry.
Handsome doctors like Dr. Raynor Sharpe and Dr. Steven Sharpe along with beautiful Dr. Janet Jones-Sharpe will take care of you at the Gosh hospital.
Intertwined in the first part of this futuristic tale is a romance about Janet and Raynor which will warm your hearts.
The highlight of the story is the life of the protagonist Dr. Steven Sharpe who was kidnapped as a child.
Zeeka Chronicles: Revenge of Zeeka was an award winner in the Category Young Adult Thriller in Readers Favorite International Awards 2018, winner in Science Fiction in SIBA Awards 2017, winner of the gold award in the category science fiction in Connections Emagazine Readers’ Choice Awards 2018, and winner in the top ten finalists for science fiction in the Author Academy Global Awards 2018,.
Here is a recent review from an Amazon reader:”An entertaining read filled with suspense. A science-fiction story with lingering themes on human flaws and goodness.
As a teacher/student this would make a great comparative study to Frankenstein or Shakespeare’s plays, with love, lies, and revenge as persistent human traits. Set in 2036 the unnerving accuracy of being in an era where we encounter robots as part of our daily lives takes the reader on a journey through time where human values, some negative and some are imperative to the improvement of the human condition.
If you’re not a zombie fan, this book will draw you –destined to shock and delight.” MN

What Inspired You to Write Your Book?
With the scare of the zika virus, my imagination started to form stories in my mind. I had never written a science fiction novel before and decided to try. I wrote the first episode Zeeka and the Zombies and it was well-received. The other episodes followed naturally – Zeeka's Child, Zeeka Returns, Zeeka's Ghost and Resurrection. Zeeka kept speaking to me telling me what to write. The book became the winner of several international awards.

How Did You Come up With Your Characters?
Some of the characters themselves gave me their names. Zeeka was the man who used science for revenge and he used the unfortunate effects of the zika virus to do so. Number Nine was the ninth zombie and he had a story of his own which is revealed in the final episode, Resurrection. I chose the names of the other characters off the top of my head, and readers say that they fell in love with Janet and Raynor, two doctors at the hospital in the fictitious island of Gosh.

Book Sample
RAYNOR HAS A VISION