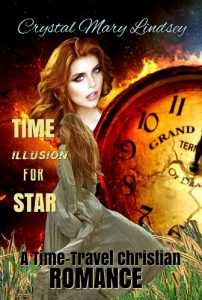 Hearts ignite at first sight.
STAR, headstrong, beautiful and full of intoxicating dreams of the future. BLAINE, a strikingly handsome neurosurgeon new to town – captured at first sight by her dramatic loveliness and magnetism.
Abruptly all comes crashing down for them one fateful day when in the wrong place and at the wrong moment, Star is careered back through time to early Virginia 1754.
Rescued by Baron, a handsome wagon trail scout, Star narrowly escapes an Indian war party.
Carried on horse-back to the wagon train, she is about to experience the hardships and sometimes hilarious events of pioneer life.
Taken under the protection of a woman named Hildy who lost her daughter and then her husband during the long journey south from New York, Star is uncertain what her destiny will be once this woman reaches her final destination.
Is this a dream created by her unconscious state, or is it a delusion, hallucination, or perhaps an illusion? Whatever the explanation, it is terrifying!
Will STAR remain in 1754 or somehow return to her own time, and her newfound love?
Only Father God knows how to bring this young woman back to himself.

What Inspired You to Write Your Book?
My Inspiration to write this book came from several factors. Firstly, I love to read Time Travel stories, yet some don’t seem to get the vanishing back through time part correctly.
As a retired specialist nurse and aware of the unconscious patients’ ability to hear and know while in a comatose state, I drew on this understanding for traveling back through time. Having my seventeen-year-old granddaughter living with me
and sighting the rebellion in her plus praying for her safety, also contributed to the story.
When writing, I use my formed education of nursing, mental health, emergency medicine, psychology, and Bible College to draw an exciting picture of events.

How Did You Come up With Your Characters?
My heroine, STAR, was inspired by observing my granddaughter Sharn Crystal Star. The hero neurosurgeon was an excellent doctor I once worked with, Julian. Star’s mother was my gentle quiet ever praying, sister Janiece`. Grandfather was deceased father-in-law Nonno, a wonderful no-nonsense Italian man. The remaining characters were a figment of my imagination, possibly people who at sometime made an impact and have remained in my sub-conscious.

Two hours later, with chores finished, the confines of their quarters were left as they ventured out into the crisp air. Rocky ran ahead, giving excited barks while looking back occasionally to make sure they were behind him.
Not far down the road, Harvey and Jasper rolled up in a solidly built homemade sled. With plenty of room for another three, they were welcomed and piled inside to bury under a heap of furs. Rocky nudged his nose to sit between Jasper and his father, giving the boy a happy lick with his long tongue.
Taking off on the ride, Star began to sing, JOY TO THE WORLD at the top of her voice having heard Belle sing it around the house. At least the hymn was one from this era, and she couldn’t go wrong. Belle joined in, then Harvey in his deep baritone voice, while Jasper was content to listen. They rode around until snow began to fall again, then headed for home.
Dropping everyone off at the storefront, Harvey took his horse and sled housing at the livery. It wasn’t long before he returned to knock at the door and entered with a sack of something slung over his shoulder.
“I brought you a gift knowing you might be almost down on provisions.” The massive bundle hit the table to be opened and display a butt of venison. Harvey grinned, glad to be the bearer of welcomed fare.
“Harvey, you are a Godsend,” Belle cut off a chunk to put into a pot on the stove. Adding salt and the lid, she removed a kettle of boiling water to make everyone a hot drink.
Sitting around the table enjoying their friend's company, Hildy told him how she and Sally almost fell prey to Jeremiah Riley.
Harvey shook his head. “He’s a bad egg that one and takes many newcomers around here for a ride on his lies. Glad to hear he didn’t win this time, but I’ll let him know that you are in my care, and he better keep his end of the bargain.”
The thunderous look coming over Harvey’s face showed the women they were well protected. “It’s a good thing Rocky is here to give a warning if he comes snooping around before I get to talk to him. That dodger is not to be trusted.”
“We knew that as soon as he pretended, not remembering what he bartered us.” Sally pushed cornbread across the table to the big man along with a jar of blackberry jam.”
“Now help yourself, we have plenty and enough to give you a couple of jars to take home. How is your momma, by the way, she rarely leaves the farm, does she?”
“She is well,” he nodded. “ Better now than she was but more content to read or knit in her spare time. She will be grateful for the jam; it's her favored.”
He stood up and reached for his coat, calling to Jasper in the other room playing with Rocky. “Come on, son; Grandma will be wondering where we are, and if this weather changes for the worst, we best be home before it does.”
Sally went to collect the jam, understanding it to be a treat. She picked four jars, bringing them to the table and placing them into the same bag from the meat. Each pot was wrapped in brown paper so as not to get contaminated.
Before he left, Harvey surveyed the women around him. “If you have any more trouble with Mr. Riley before you see me again and you need my help, send Rocky with a note tied to his collar to Jasper, he knows how to find us.”
They all hugged him in appreciation before he left, hoping there would be no more trouble, but glad to have him to turn to – just in case.

Two days later, Sally answered a heavy knock at the door to find Mr. Riley fuming on their doorstep. His voice bellowed through to where the other three sat sewing. Rocky got up growling, and Star followed him to the door.
Sally cowered under the onslaught of abuse spitting from the revolting man’s mouth.
“You ran complaining to Harvey Graham about me, didn’t you, well he’s not here now for you to hide behind.” His finger shook in poor Sally’s face to intimidate.
Star heard what was going on – and rushed to support Sally with Rocky running with her. She grabbed and held Rocky by the collar as he stood on hind legs snarling and trying to attack.
“Go back in Sally, please, and take Rocky with you.” Sally stood frozen with fear, and it took Star yelling her name before she slowly got a hold of herself, took the dog's collar and pull him away.
“Remember that Rocky has a note to deliver,” Star called after her retreating back. Sally looked back and nodded to show she understood.
Mr.Riley’s face blazed red with anger causing his neck to swell. His cold eyes stared defiantly – daring her to stand up to him.
“Well, since you know that Harvey is our guardian, why have you come here to heave insults?” She stood her ground firmly with arms folded, staring back at him. Hearing the store door slam shut gave her all the more confidence knowing Rocky would take about ten minutes to reach Harvey, and in another half hour, he would be back. All she needed to do was keep this man's attention by sparing, word for word.
“I’ll do more than heave insults young woman; you don’t know who you are dealing with.” He gave a nasty laugh.
“You don’t know who YOU are dealing with either buddy, so don’t underestimate your might.”
He laughed in her face. “You, a hundred and forty-pound woman, if that, I can flatten you like a fly.”
“Oh, good at the threats to a woman, aren’t you, I bet you didn’t flutter your rooster feathers like that around Harvey.”
“Rooster feathers, why you little idiot, I’ll show you.” His hand rose to strike her, but Star caught it in a karate hold – twisting it up behind him so that he fell to the ground on his knees.
“Belle!” Star yelled. “Bring me some rope.”
Star's knee was in the men's back, holding him down while keeping the pressure on his bent arm. He couldn’t escape. Neither could he fathom how she outsmarted him.
Belle returned with Hildy and Sally close at her heels. Using her other hand, Star pushed the man's head down to the floor while shifting her knee so that her leg help him helpless.
The women couldn’t believe their eyes but quickly helped by pulling the man's other arm around to join the one Star held, tying both hands together securely.
Mr. Riley lay with his face side-on to the floor and out of breath, trying his best to fight his ties.
“What on earth Star, how did you do that?”
Star knew very well how she did it, but in this day and age, they might likely think her to be a witch, so she gave the best reply she could to satisfy them.
“Well, God is my refuge and strength, so He helped me.” There was no lie in this explanation as Star had been the worst Karate student when being instructed by Mila’s brothers. She never expected to be put to the test with her poor skills. Now she thanked the Lord in her mind for helping her when she needed it.
Suddenly she felt weak at the knees as the shock of what she’d been able to do hit her full force. Not wanting the vile man on the floor to witness her feebleness, she took hold of Hildy’s arm, allowing guidance back to the kitchen table.

Once there, she almost fell into a chair and felt like crying.
Get a grip on yourself. Star scolded herself.
“I need a drink of water, Hildy, to calm my nerves.”
“Of course you do, dear. I’m sorry for not thinking.”
Not only was she given the water, but a hug of comfort came as well.
“What would we do without you, Star, what a brave girl you are. I could hardly believe my eyes. Why it reminded me of how a cowboy tosses a calf for branding.” She began to giggle, helping Star to see the funny side and laugh as well.