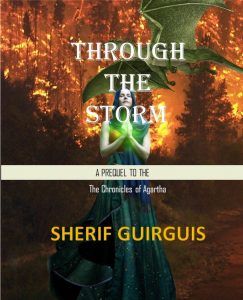 Rowida is a young woman with grand dreams, who ventures on a path that would change two worlds and span more than a hundred years.

Once back, she raises an army the Inner Earth had never seen the likes of and starts the first global war. Thousands of lives are lost, nations and races cease to exist, yet Rowida has just begun a far longer story.

If you liked the Golden Compass, you will love Through The Storm.

Read the story of Rowida, one of the most powerful female leads in fantasy, TODAY.

What Inspired You to Write Your Book?
I wanted to show the reader my vision of the world of Agartha, and how the politics of this world works, so, I had to tell the story of the war that shaped Agartha, and the woman who led it in Through The Storm.

How Did You Come up With Your Characters?
Rowida, the main character is an example of an ambitious person who followed their ambition way too far. Let's just say that I met Rowida in real life at some stage of my life.