You are here: Home / Buyer's Guides / The Princelings of the East Books 1-3 by Jemima Pett 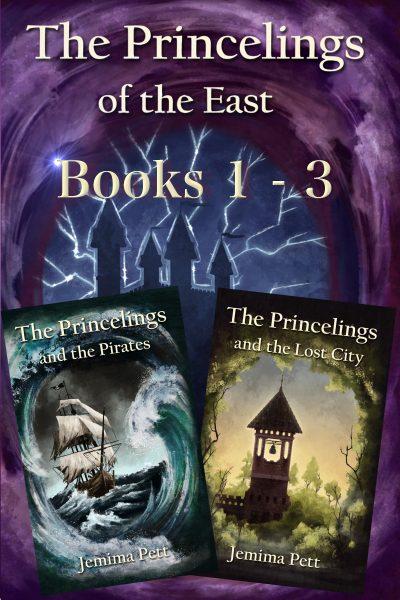 The Princelings of the East Books 1-3 by Jemima Pett

A time tunnel, a pirate king, a lost city. In three separate adventures, Princelings Fred and George set out to solve trifling problems, and uncover dangerous and sometimes desperate foes, each with his or her own agenda, threatening the peace of the Realms.

The Princelings of the East: the saga starts with Fred and George leaving their cosy Castle in the Marsh. They encounter the mysterious cola vendor Hugo, the playboy Prince Lupin, and the over-worked innkeeper Victor, and have to use their own wits to decide who to trust, and how to prevent their ordered society descending into chaos.

The Princelings and the Pirates sees our heroes setting out to discover what has gone wrong at Castle Dimerie. It’s a simple errand that ends in kidnap, shipwreck, and a battle in which no quarter is given. Princeling Fred rescues a damsel in distress, not that she thinks she is.

The Princelings and the Lost City introduces George to the delights of flying, and Fred to the tortures of true love. Their inventions and experiments take a back seat as the puzzle of the Lost City and its all-female society lead to questions that may be too difficult to solve.

And having experienced a time paradox in the first adventure, George is under pressure to achieve a new method of providing the world with energy from strawberry juice. It’s a project that, for all the benefits it brings, creates far-reaching changes in their ordered society.

Praise for the books

“Princelings of the East is a suspense-filled mystery strong on character development, with a deliciously complex and engaging plot, that is sure to be enjoyed by older tweens and adults alike.” (Mother Daughter Book Reviews)

“The plot is absolutely brilliant. It’s sci-fi mixed with mystery and action, and I would recommend it to everyone!!!!” (Joshua A, aged 13, for Published Bestsellers)

“Another hazardous adventure, complete with swashbuckling pirates and beautiful princesses. As in the first book, the story is narrated in a fun and engaging style. The writing throughout is top quality and I love the witty chapter sub-headings.” (Wendy Leighton-Porter, author of the Shadows from the Past series)

“Lost City, book 3 in the [series], is a great read for those who love fantasy with young male protagonists. The plot is new, interesting, and will engage your mind in the story. A great work was created by the author with this trilogy. (Anna Dye, Readers’ Favorite)

These three adventures are also available as standalone ebooks, paperbacks and now as audiobooks (no 3 is in preparation).
This is a revised box set edition of the three titles, complete with their chapter illustrations, updated to match the audiobooks.

What Inspired You to Write Your Book?
The idea for three stories came from my guinea pigs, Fred and George. I blame them for inspiring the idea of a world running on strawberry juice, but I decided on the pirate and lost city adventures as they seemed exciting. And they were!
Princelings of the East (book 1) was my first published book, and several people have commented that I hit my stride with book 2. And then the characters wouldn't lie down, so the series ran until book 10, Princelings Revolution.

How Did You Come up With Your Characters?
If you have animals, you know they have distinct characters. With four guinea pigs sitting near my desk, it was easy to develop their roles in the books; Fred, George, Victor the chirpy youngster, and the baddie in book 1: Hugo. Then Hugo complained he didn't have a big enough part, so he got his own book at number 4. That started an avalanche of later pets demanding their own adventures. But I didn't have enough females at hand (or with friends) to base my women characters on. Kira (the damsel in distress) is how I wish I could be. She's definitely my heroine.
I find once you put the character in a situation, they do what they want, rather than following your carefully designed plot. It's probably better that way.

Book Sample
*Some way into book 2, Fred, George, and several others have escaped from the pirates, Fred rescuing Kira on the way, as she'd been held hostage by them. They have taken refuge in a deserted castle, and are searching for their friends who planned to come here.*

They set out on their quests, Fred, George and Kira leaving through the door near the fireplace after the others had gone back down the stairs.
“What if they are between the ground level and this one?” Kira asked.
“I think we could cover that if we think we hear them,” Fred answered. They went quietly along the main passageway, looking around corners before they moved into the open, and stopping every now and then to listen. Eventually they came to what they thought must be the end of the castle at that level.
“Shall we go up here?” George pointed to a stair spiralling up inside a tower.
“Might as well,” Fred replied, and they went forward, Kira following Fred, then George in the rear. The stair curved round the wall and occasionally there was a slit window where they looked out on the surrounding countryside. “We ought to watch for pirates as well,” Fred commented and they nodded in agreement.
They skipped one floor and went along the corridor on the next. It had a low ceiling and they thought they were probably pretty much on the top floor.
“Stand still,” George hissed. They stood, and listened, but could hear nothing. Fred and Kira looked at George questioningly. He shrugged. “I thought I heard something.”
They walked on, but George stopped again and turned round. They all stopped, and George looked carefully behind them. “Swap over,” he whispered to Fred, and they changed places so that George led on and Fred brought up the rear. They went a few more paces then Fred stopped and turned round. He looked carefully, then waved at George and nodded. He pointed to an archway a little further ahead; they crept forward to it and stepped out of the corridor itself. Fred stood in front of Kira, but she looked over his shoulder, not wanting to miss anything. They could all hear a quiet shuffling noise now they had stopped.
Slowly the noise came closer.
“Is it a ghost?” Kira breathed in Fred’s ear.
Fred shook his head, no, and said nothing. His heart was beating very fast. He didn’t know whether it was scared of the shuffling noise or excited by Kira so close to him.
The shuffling noise went past them and then disappeared.
“Did you see that?” whispered George, puzzled.
“What?” Fred responded, equally quietly. “I didn’t see anything, except it all went fuzzy for a moment.”
“Exactly,” George whispered. The brothers looked at each other, then at Kira.
“I couldn’t see a thing,” she breathed.
They cautiously looked out of their alcove. There seemed to be an obstruction in the corridor, but they couldn’t make out what.
“It’s beginning to get dark,” Fred whispered, “We’d better get back to the others.”
Their alcove seemed to have a set of narrow stairs in the corner. They decided to go down two levels and hope to get back to their own hall rather more quickly that way. They seemed to be in quite a hurry to get down the stairs and they crowded up against each other until they got back to the hall they had started in. Once there they relaxed by the fireplace. The others were not yet back.
“Umm, did we see something odd upstairs?” Fred asked once they had sat there a while.
“Er, yes, I think so,” George said. “I don’t know what it was, and I don’t really want to find out.”
Night had fallen, and they looked at the fireplace wishing it had a nice comforting fire in it.
“We really need a nice comforting fire,” Fred said, wistfully.
A small glow appeared in the fireplace and grew to a small sized log fire, all of its own accord. Kira started shaking.
“What is it, Kira?” Fred asked, going over to her and putting his arm round her shoulders.
She pointed at the fireplace. “H-how d-did that g-get there,” she stammered.
“Well, it’s just something that’s been happening to me lately at my home castle, and I just thought it was worth a try here,” he said, squeezing her and rubbing her shoulders comfortingly.
“Good idea,” George said. “How about saying we need to find Baden?”
“I don’t think I’ll push my luck.” Fred grinned and let Kira go. “I wonder where the others are?”
“You know we were doing this search till sundown and then coming back here?” he said after a while.
“Er, the others aren’t back, are they?” George said, and they looked at each other in the dark room, their faces only visible in the light from the little log fire.
“Oh, dear,” said Kira.