You are here: Home / Epic / The Inheritance Trilogy by N. K. Jemisin 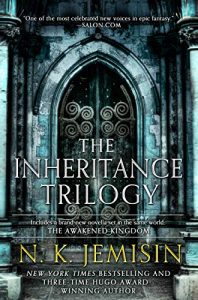 After her mother’s death, a young woman is summoned to the floating city of Sky to claim a royal inheritance she never knew existed in this epic fantasy trilogy from the NYT bestselling author of The Fifth Season.

Yeine Darr is an outcast from the barbarian north. But when her mother dies under mysterious circumstances, she is summoned to the majestic city of Sky. There, to her shock, Yeine is named an heiress to the king. But the throne of the Hundred Thousand Kingdoms is not easily won, and Yeine is thrust into a vicious power struggle.

The Inheritance Trilogy omnibus includes the novels: The Hundred Thousand Kingdoms, The Broken Kingdoms, The Kingdom of Gods, and a brand new novella set in the same world: The Awakened Kingdom.