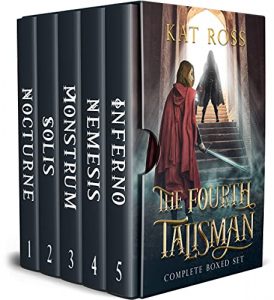 Nocturne, a wilderness of eternal night.
Solis, a wasteland of endless day.

It’s been a thousand years since the Avas Vatras tried to burn the world to ashes. A thousand years since they were imprisoned in the arid death zone called the Kiln. But revenge is a dish best served cold—even, apparently, by the children of fire. As war brews again, a young woman named Nazafareen must learn to control her own volatile power to stop the creatures whose mad king sundered the realm into light and dark.