You are here: Home / Archives for Soulmates 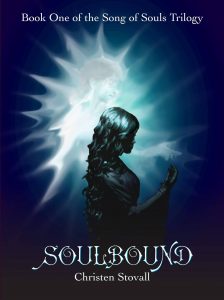 To celebrate the release of the final book in the Song of Souls trilogy this August, the first book, Soulbound, is only $).99 for the entire month of June!

Living in the quaint farming village of Brittendell offered a simple life of home and family. When Aislynn, the daughter of a local farmer, and Rorin, the son of a wealthy horse trader, married, another charming love story enlivened the tranquil town. Aislynn and Rorin were profoundly connected, but their relationship came to a screeching halt when Rorin was killed in a tragic accident. Their bond sends Aislynn into a spiraling depression as she continues sensing Rorin’s presence. Soon, Aislynn finds herself thrust into a dangerous world of magic filled with hobgoblins, elves, and wizards. When Aislynn is captured by the future king of Venallis and forced to help him uncover a mysterious magical artifact she discovers that fate has far greater plans for her than she ever imagined. Perhaps death is not always the end.