You are here: Home / Archives for Sasha 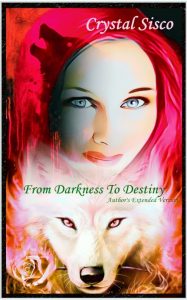 Destiny had been alone for so long taking care of her parent farm since their death that she felt as if she would never know what being part of a family was again. She knew nothing of her heritage or what was to come in the days ahead. She was surrounded by silence and the loneliness that had become her very existence. Across the Sacred Forest hidden in his manor Dominic wallowed in self pity at the darkness that had taken over his life, his soul, and his household when he had lost his beloved wife Jasmine. If he only knew how that one bright light from his past would change his future.

Their curse was an ancient one and he would never bring anyone else into his world again, but when a stranger ends up on his doorstep half frozen and bitten by a wolf, Dominic knew he had to help. He couldn’t just let her die. He was sworn to help the innocent as a Guardian of the Mahigan Knights. Then he saw her and his world fell away. She was the spitting image of his beloved Jasmine. With heartache, intrigue, trial, and the power of love, Destiny and Dominic find their way to each other and their family watches as these soulmates are brought from their own darkness to their destiny.

What Inspired You to Write Your Book?
This is a retelling of the original short story. So much was unable to be included as each character still had a part to play. Love, family, and searching for the power to overcome all obstacles shines so brightly that it brings out all the storylines ready for book 2!