You are here: Home / Archives for royal 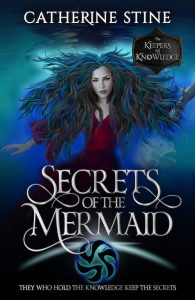 $0.99 sale & FREE on KU! Meet Indigo Rain, a beautiful but lonely mermaid. Regretful of a dark past, she has vowed to remain alone and research ancient merfolk tribes. When she unearths a seabed burial site that even she cannot identify, she shares this with a High Council merfolk historian. But she keeps one shocking secret to herself.

Bay Finley is the flirty, dashing Royal merfolk Keeper assigned to teach Indigo on Pyreshore, a glamoured city of supernaturals tasked with keeping invaluable knowledge alive. Indigo thinks Bay is a know-it-all. She also thinks he’s dangerously handsome. He’s engaged to Abigail Torrent, a Royal, unlike Indigo, but he’s spending time with Indigo in the lab…

Indigo has three quests:
Uncover the mystery of the burial tablet, resist falling in love, and never, ever reveal her biggest secret, even to the Keepers. Some secrets heal, some kill. Other secrets change life as we know it. Shared world series. Book can be read as a standalone!

Buy Secrets of the Mermaid Here