You are here: Home / Archives for realmccoybooks.com 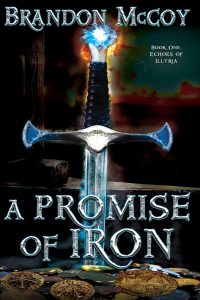 Echoes of Illyria is an ongoing fantasy series. The epic saga blends elements of high fantasy and adventure with a focus on realism, relatable characters, and true moral dilemmas. Set in a world where metal is incredibly rare, three friends battle the evils of empire while unraveling the secrets of a forgotten past…. And a hidden foe.

A Promise of Iron, book one of the Echoes of Illyria saga:

Long ago, the Illyrian Empire fell and the world of men fell with it. The Illyrians are gone now. Nobody knows where. All they left behind are miles of dark roads and unanswered questions.

From the darkness the Cyllian Empire has emerged. It straddles the old thrones of men and brings a tenuous peace, filled with the unease of hate and the impatience of idle spears.

The Mere grow restless in their mountain homes. They strike at the lands of men with a boldness not seen since the days of Illyria.

The Ruk bear the scars of a long-lost war. Toiling under the heel of the Empire, they have little hope for a better life.

Born out of hatred, a young man seeks to bring it all down, stone by stone, brick by brick. He’s no hero. Heroes are fools and dead men. But he hears the words upon the wind. And he seeks a promise… A PROMISE OF IRON.

What Inspired You to Write Your Book?
I have been working on the story for years. The first draft was very different. Written about ten years ago, it focused on the story behind the story, the larger forces at work. Admittedly it missed all the heart a story needs to truly live. Enter stage left, Aubree McCoy, my four year old daughter. You could say she was the inspiration… you could say she helped me find the heart of the story… and you would not be wrong.