You are here: Home / Archives for magic realism 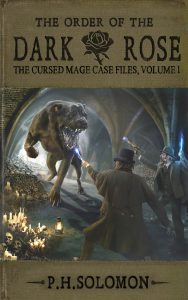 The Order of the Dark Rose, the first book in The Cursed Mage Case Files shows signs of promise as a series. Author P.H. Solomon welcomes you to the capital city of Cal Rindon, where magic is the lifeblood that runs its industries and is equally abused in criminal activities. Manny Mandeheim used to be an arch-mage with good standing, but it all disappeared when he falls upon a curse, witnesses his fiancée Adrienne die, and loses his career in espionage. As a former spy, he has a need to find out who is behind everything, for it is his way back and the way to honor Adrienne’s memory. But as he becomes more deeply concerned with clearing his name than understanding the depth of his case, it might be too late for him to realize that he has been looking in the wrong direction and that uncovering the mystery may not be to his liking. 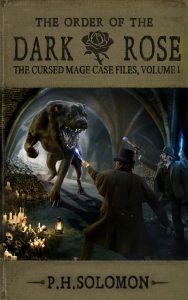 An arch-mage can handle almost anything. Unless he’s cursed, lost his job and facing an unknown enemy.

The Gallantean Empire relies increasingly upon magical technology which cleans sewers, runs trams and much more. Within the capital city of Cal Rindon, magic is pervasive, but not necessarily used without criminal activity. The bustling metropolis boasts constant innovations mixed with growing pains. Amid the good lurks the bad with unrest and growing crime.

Arch-mage Manny Mandeheim fell under a curse, watched his fiancé die, and then lost his job as a spy. So what’s an arch-mage to do? Start his own magical investigation service while he works to clear his good name and maybe avenge his lost love. With his very un-magical partner, Wish Ackford, Manny discovers the menace of a much larger conspiracy than he expected looming behind his curse. The limitations from the hex leave him at a distinct disadvantage as he and Wish investigate.

Assassins lurk at every corner or in every tram car. The threat of an unknown mastermind with murky intentions lingers just out of sight. A questionable source offers the hint of a secret order hounding Manny’s footsteps. A murder leads to wrenching discoveries.

Nothing an arch-mage can’t handle…

Unless the curse limits how much magic he can use or kills him outright.

A mixture of gaslamp fantasy and Sherlock Holmes-like cases, The Order of the Dark Rose is a sleuth private detective mystery set in an alternate fantasy world where magic is both commonplace and dangerous. Mysteries abound in this original, new fantasy from P. H. Solomon, author of the award-winning, best-selling epic fantasy series, The Bow of Hart Saga.

Can Manny survive long enough to break his curse? Or will the arch-mage’s hidden foe escape him?