You are here: Home / Archives for Louise Saville 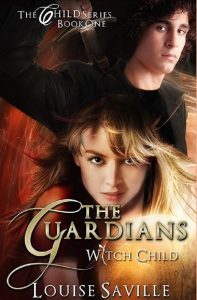 The Guardians: Witch Child (Book 1)
Debut Novel. The start of an epic tale that will span Ages and Generations.

Two ill-fated souls are trying to escape the control of their elders, instead collide with each other and discover they are forever bound together by the same infernal curse. The darkness they fear is found in their own hearts and for good or ill they are doomed to replay the calamitous events that destroyed a kingdom.

From the time of his chaotic birth that sent his mother mad, Jett Storm’Heart has lived under the shadow of an unspoken curse and an ominous prophecy. Despite no parents, Jett was treated with indifference by his people. Passed between families as a child or living on his own, he never felt he belonged among them. Their aloofness reared in him an unruly and turbulent spirit, causing him to be at odds with his Elders. Due to his rebellion, his activities are controlled and his travel restricted. He grew to despise their authority. Driven by a need for answers to the fall of his family, he was met with apathy and silence. Angry and frustrated by the restrictive confines of his society and the layers of rules and myriad degrees of traditions, he is desperate to escape their watchful eyes and take up the search for his missing father.

Since she could remember, Mara had only ever lived under the rule of her cruel mother. Her ambition was to become as powerful as her mother in witch-craft. Now she was appointed the most significant task of her short life, opening a Gate to another world. Ordered to meet with an acquaintance of her Mother, a mysterious stranger on the outskirts of Ryne, her true destiny lurches into view, the dark mysterious stranger was not the one she was expecting, but perhaps in the end the one she needed.