You are here: Home / Archives for generation z 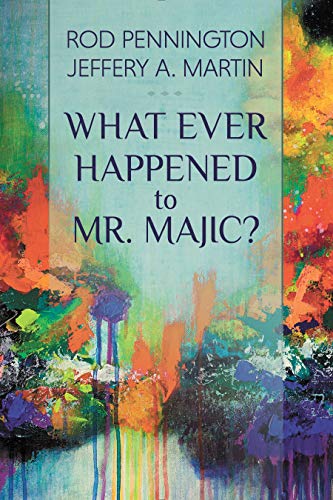 What Ever Happened to Mr. MAJIC? by Rod Pennington

On the day of her mother’s funeral, twenty-three-year-old Grace Maxwell discovered the man who raised her was not her biological father. Instead, he was a best-selling self-help author and a world famous “Guru to the Stars.” Known as Mr. MAJIC for the miraculous impact his books and seminars had on millions of people, he had inexplicably vanished around the time Grace’s mother became pregnant with her.
For over 20 years, the mystery of Mr. MAJIC’s sudden and unexpected disappearance, and the speculation of what might have become of him, was the stuff of Urban Legend. The theories ranged from he was a homeless bum living under a bridge in the Bay Area to his most avid fans claiming he had attained divine enlightenment and had ascended straight to heaven. Even nearly a quarter of a century later, on the anniversary of his disappearance, there would be stories in the media asking what ever happened to Mr. MAJIC?
Among her mother’s things, Grace discovered MAJIC’s long missing and thought lost forever unpublished manuscript, “The True Path to Enlightenment.” The manuscript was considered to be the Holy Grail of self-help books and was worth a king’s ransom. The problem for Grace, before anyone would publish the book, she must prove the manuscript was not a fake. This was no small task, considering the only person who could provide the definitive confirmation hasn’t been seen or heard from in over two decades. With the help of her fellow Generation Z sister and an old-school, hard-boiled detective that had made finding MAJIC his life’s work, Grace goes on a quest to find the elusive Mr. MAJIC.
Along the way she meets her perfect soulmate and finds true inner-peace and a state of wellbeing she had previously thought unimaginable.
Wrapped inside this fast-paced romantic mystery, the reader will discover a simple to follow tutorial of how to identify and release the things that are making them miserable. They will gently be shown a simple step-by-step process that, if followed, can lead to a state of enlightenment and wellbeing.
From the Authors of The Fourth Awakening which spent four years in both the US and UK as the number one bestseller in New Age, Mysticism. The Spanish edition was the number one bestselling “Foreign Language eBook” in the world on Amazon.com.