You are here: Home / Archives for David Burnett 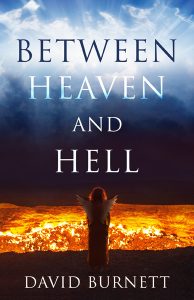 Adryel and Ramael are young angels in love, bound together for eternity. Their plans are disrupted when God determines to create humans and Lucifer, one of the archangels, rebels.

Adryel casts her lot with Lucifer. Swayed by his arguments she wages war for his cause and, refusing to renounce him, is exiled in hell. From hell, she befriends the humans, and she accomplishes more to thwart God’s plans for humanity than do Lucifer and all of the other fallen angels combined.

Decades pass. Disillusioned, pursued by soldiers, and alone, Adryel yearns to tell Ramael her love has not dimmed. Punishment, hell’s lake of fire, not forgiveness, awaits her should she be found seeking him, but if Ramael will accept her, she could die in peace.

Buy Between Heaven and Hell Here