You are here: Home / Archives for clara winter 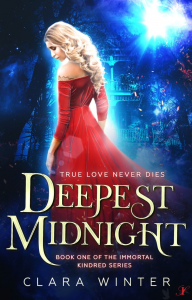 For Millicent, a once French noblewoman turned immortal vampire, forever is a long time to live in despair. The love of her life is murdered the night she becomes immortal. Millicent spends her endless night in a melancholy which never ends. Two hundred forty years later, she locks eyes with an English actor, who happens to look exactly like her long dead love.

Sadness turns to happiness as Millicent and Jack find passion in each other’s arms. Their fling quickly turns serious as Millicent finds happiness once again—and possibly her one true love.

However, their relationship becomes complicated by her own uncertainty, Jack’s mortality, and the other man in Millicent’s life, Alexandre, her maker, and companion. When Alexandre puts his foot down, Millicent must decide if she’s going to continue to be led by others or take the reins and drive the outcome of her life.

Deepest Midnight is set in modern-day Savannah, Ga with occasional glimpses back to 18th century France. This is the first book in The Immortal Kindred Series.

What Inspired You to Write Your Book?
Deepest Midnight was inspired by thoughts I had about vampires and reincarnation. This formed the basis of the novel. I always keep a notebook handy, as you never when a random thought could turn into an idea for a book.