You are here: Home / Archives for #catfiction 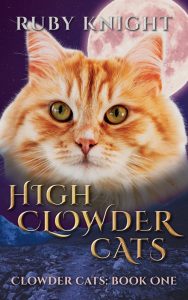 Life is not easy for a feral cat at the best of times, but the difficulties Bushytail faces on his journey to search for a home are far from ordinary.

Bushytail wants to find his own territory, but the journey is dangerous. He has to avoid the humans and their noisy machines as well as being on alert for other toms that may want to challenge him. He is used to relying on his wits to survive, however, Bushytail realises that this time he needs friends to help him. He joins up with a band of clowderless young toms. After being on his on for so long he is glad to have company, but this is just the start of the long journey Bushytail makes, along the way discovering who he is and how he fits into the world of cats.
Bushytail is guided by the enigmatic Bristle, who insists that Bushytail needs him as a mentor. At first, Bushytail does not see the point of the rules Bristle is trying to teach him, but in awe of Bristle’s powers, and with much encouragement, he perseveres. Unfortunately, the things Bristle is trying to teach him do not come naturally to Bushytail, but Bristle is convinced that Bushytail will need the skills being taught and will not take no for an answer.
Like any young cat, Bushytail has high hopes and dreams, however, in the end his destiny is thrust upon him rather than being a path of his own choosing. There are many times when he nearly gives up, but, with the help of the Stone, he learns to put the needs of others before himself and accept the future that is laid out before him. Bushytail is eventually transformed into a spiritual guardian and master warrior. Every step of the way his self-doubt threatens to overwhelm him, but somehow, despite his misgivings, he becomes instrumental in creating a new order for catkind through High Clowder.
Unfortunately for Bushytail, not all cats are convinced that the new order is best for catkind. Cats have always walked alone, with power being bestowed only on the strongest. Those cats who are weak or infirm, generally do not survive for long. For a long time, this has been the natural order of things. Some cats question whether the idea of a new community – where the very young, elderly, weak and sick are cared for – should be allowed.

The question is, even if he is successful, will Bushytail be able to live out his life in peace with those he loves, in the clowder he is trying so hard to make a safe haven for all?

High Clowder Cats is the first book in the series Clowder Cats by author Ruby Knight. This series follows the adventures of feral cats living together and their struggle to survive.

What Inspired You to Write Your Book?
I began writing High Clowder Cats because a student I was teaching wouldn't read to me unless it was about cats. When I wrote about Bushytail, I knew I wanted to turn the story into an engaging novel for young readers, but also one that has challenging themes to allow readers to have conversations about things that matter to them.