You are here: Home / Archives for Cady Hammer 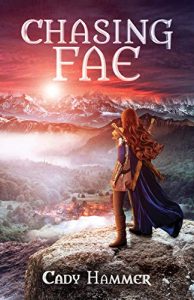 Grace Richardson is a young mortal woman whose only concerns are providing for her family, playing her violin, and spending as much time as possible with her brother, Leo. When Leo goes into service in the Fae’s world as a mercenary, she expects him to return with the honor that he deserves.

When Leo suddenly dies in an unspecified accident, not a word, medal, or penny comes down from the higher-ups. Suspecting foul play, Grace disguises herself as a Fae and sneaks into the Upper Realm to get some answers. She anticipates being in way over her head, but the Fae soldier who discovers her true identity only a day in? Not so much.

Now Grace is forced to drag Aiden along as she tries to work out exactly how and why her brother died. Along the way, she has no choice but to confront her prejudices against the Fae as she attempts to sort out the difference between the honest and the dishonest. Political conspiracies, demon realm escapades, and family secrets will all lead Grace to the answers she’s looking for… and some that she isn’t.

Join the adventure in Chasing Fae, Book 1 of the Chasing Fae Trilogy!

What Inspired You to Write Your Book?
I came up with the idea for this story during one of the lowest points of my life. A friend who I had considered like a brother to me abandoned me without so much as a word. It was at a time where I was dealing with a lot of stress and grief due to bullying at school and complications in my parents’ divorce. I was heartbroken. After a while, I didn’t want to be angry or upset anymore, so I took that pain and pushed myself to create something beautiful from it.