You are here: Home / Archives for Bethany Rae Salway 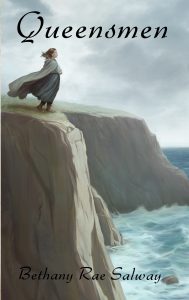 It’s a bleak time for the people of Mackabine. A false Regent holds rule over the capital, while in the county of Geid, a corrupt Baron confiscates grain while his subjects starve. The only opposition comes from a group of outlaws known as Queensmen.
Senna is no Queensmen, no hero of legend, but she devises her own scheme to undermine the Baron by becoming his housekeeper. Can she learn enough to turn the Baron’s secrets against him? And perhaps catch the eye of the handsome leader of the Queensmen?

Targeted Age Group:: 12 and up

What Inspired You to Write Your Book?
Queensmen coalesced from a conglomeration of daydreams that began in 6th grade and grew increasingly complex thereafter. I think the original premise arose from my love of the Disney movie Robin Hood. You know, that 70's cartoon with the fox.