You are here: Home / Archives for A.G. Riddle 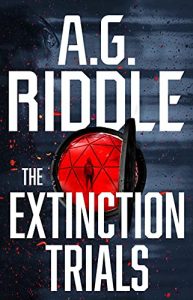 THE END… IS ONLY THE BEGINNING.

After a mysterious global event known only as “The Change,” six strangers wake up in an underground research facility. They soon learn that they’re part of the Extinction Trials—a scientific experiment to restart the human race.

But the Extinction Trials hides a very big secret.

And so does the world outside.

Welcome to The Extinction Trials, A.G. Riddle’s first new novel in two years. It’s an uplifting, standalone story about a group of people struggling against impossible odds to save their families in a world gone crazy—with a surprise ending unlike anything you’ve ever read before.