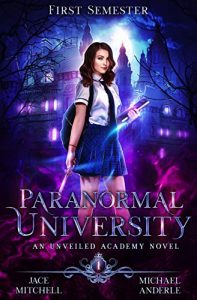 At the University of Paranormal Studies, class is starting.

Claire just received her letter of acceptance despite the fact that she didn’t apply. Why does the university want her?

Because ghosts, vampires, werewolves, elves, dragons…They exist, and more are crossing into our world every day. The problem? Many of them want to kill us.

Claire has a rare ability to actually see these creatures. See? Heck, her best friend is a drunk leprechaun.

Coming from a small town, Claire thought her future prospects were flipping chicken at the local fast food joint. Now she’s traveling to Boston, where she’ll learn how to fight this ‘mythological invasion’. She never thought she’d be in a class called Vampires 101 but…

Claire’s a soldier in this new war – she will be humanity’s most dangerous asset.

And if Claire and her classmates fail? If they don’t learn fast enough and fight hard enough?

Well, graduation won’t matter too much when the world is reduced to ashes.

For fans of Shayne Silvers, Martha Carr, and K.F. Breene! Click ‘buy now’ or read for free in Kindle Unlimited!