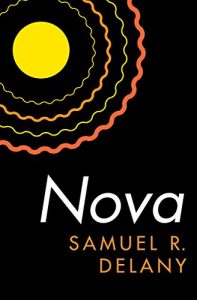 A quest for a priceless element—and revenge—fuels this far-future interstellar adventure that “reads like Moby-Dick at a strobe-light show” (Time).
In 3172, the universe is divided between three political units: the stars and worlds of Draco, with Earth as its power center; the Pleiades Federation, on whose capital world, New Ark, lives the incredibly wealthy Von Ray family, descended from well-heeled merchants whose ancestors made their fortune as pirates; and the Outer Colonies, where, in their underwater mines, tiny quantities of the fabulously valuable Illyrion have been discovered. Lorq Von Ray was a playboy and young space-yacht-racing captain who, at a party at Earth’s Paris, clashed with Draco’s Prince Red. This sets Lorq on a demonic quest, through which he hopes to find vengeance.
When a star goes nova and implodes, in the seething stellar wreckage for a few days—even hours—lie tons of Illyrion, the element that makes interstellar travel possible. To help him secure the priceless fuel, Lorq recruits a gypsy musician, a would-be novelist, and some other ragtag misfits. But an even more dangerous fuel than Illyrion is revenge . . .
This ebook features an illustrated biography of Samuel R. Delany including rare images from his early career.