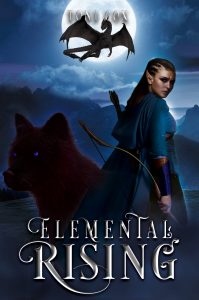 Dragons, Elves, and Magic. What more could you want from a fantasy trilogy?

Maia, Elf Princess of Grildor, has trained her entire life to be the Elemental of her people. Yet, when she returns home to Elveron after her final test, disaster strikes. She has brought with her the very thing she tried to leave behind.

Faced with responsibilities she thinks she is not ready for, a love she does not reciprocate, and a threat to her people that might kill them all, she is suddenly forced to become what she is meant to be – a Prime.

An army more terrible than the nation of Grildor ever had to face is suddenly at the Gate and Maia, with the help of her dragon, Midnight, must face the challenges of saving her people.
The appearance of Death, however, might derail all their plans. Will the bad omen mean the end of them all, or can Maia overcome that which holds her back from true power?

“Cox has created characters; a world; a story that is Tolkien worthy. She has developed something unique and rich in imagination.” Sian B. Claven (Author of The Butcher books)

“Maia is an incredible character to follow. Toni Cox has managed to bring something new, exciting, and seriously addictive to the fore.” Robyn Victoria Castles (TBB)

What Inspired You to Write Your Book?
I have been dreaming up fantasy worlds since I was a child. This one – Elveron – is one of my favourite worlds, filled with magic, elves, dragons, and adventure.

How Did You Come up With Your Characters?
The characters are an integral part of the world and they grew along with it as I created it. Soon, the main characters had family, friends, ancestors, and history.

Book Sample
The air was thin at this altitude, but her lungs were used to it. It was thrilling to fly so close to the sun.
She rose a little higher, beating her wings faster and faster as the resistance dwindled.
Then, once the air could not sustain her any longer, she folded her wings and dove towards the ground. Wind stung her eyes as she raced downwards.
She whooped with joy, but the sound was snatched away by the wind before she could hear it.
About a mile from the ground, she spread her wings and levelled out. The forest below was just a green blur as she sped past and the mountains in the north were still too far away for her to notice.
She focused instead on the many lakes that dotted the land below like so many diamonds sparkling in the sun.
She made a turn, circled one of the lakes below, and then carried on towards the north. The sheer speed at which she travelled, took her breath away, but that too she loved.
She covered miles in an instant, but it felt like she was flying for eternity. Nothing could ever compare to the thrill of swooping low, brushing the treetops, nor the peace and tranquillity of gliding above the clouds, warmed by the closeness of the sun. She felt whole, at peace with the world. She had everything she ever desired right here, right now. This was where she truly belonged.
As she made her way north, she slowly became aware of another presence. She craned her neck to see behind and above her, but saw no one. The strange feeling of unease intensified, until she eventually realised the other presence was in her mind.
She fought her panic as it started to probe her consciousness. It felt immense and dangerous. Alien, yet strangely familiar. It showed her images of strange creatures, twisted and tortured.
Faces of people, hurt and confused. Death and pain everywhere she looked. She fought the presence, to evict it from her mind, but as she struggled, she realised it was not her that was invaded, but rather that she was the one invading another.
The realisation hit her like something physical and with it came an unpleasant tingling in her body. She was overcome by a sudden, terrible weakness.
She beat the wings she knew were not hers, but they no longer listened to her command. Wind rushed past her face as she lost altitude. The tingling in her body intensified, until it was almost unbearable.
Her vision dimmed and her head pounded. She tried to suppress the nausea she felt as she fell, but bile rose to her throat, burning. Faster and faster she plummeted, driving the air out of her lungs. She tried to scream, but no sound came out. The ground rushed closer and closer, the moment of impact only a heartbeat away.
In her panic, she milled her arms, trying desperately to keep herself airborne, but she kept falling and falling, faster and faster.
Then she hit the ground … and ceased to exist.