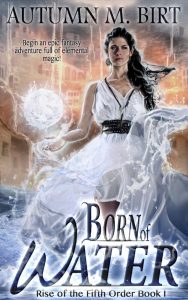 Some magic is best not to be born with.

In a world controlled by magic, not everyone wants the “honor” of being an Elemental Priestess and becoming a slave to the Church of Four Orders. But when Ria calls upon magic to save her best friend’s life, she discovers there is something worse than being able to control water, air, fire, or earth.

There is another power, one that is forbidden, and its use is punishable by death.

Ria must flee everything she has known to outrun a creature sent to capture those who use tainted magic. Her best chance of success comes in the protection of an outcast Water Priestess who might choose to betray her as much as help.

In a desperate race to save her life, Ria must discover just what is the magic she controls and why the Church of Four Orders wants anyone born with it killed before they capture her.

You’ll love this series of award-winning books if you like fast-paced epic fantasy in a richly detailed world full of unforgettable characters. Nominated for Best Book of 2017, winner of Best Worldbuilding, and recipient of a Reader’s Choice Aware and Fantasy Book of the Month March 2020, fans of Sarah J Maas, Mercedes Lackey, Anne McCaffery, and Andre Norton will be thrilled!

Begin the epic fantasy adventure described as “fast paced and … a wonderful fantasy trilogy” and “a rich fantasy full of interesting characters,” “the author’s imagination is mind-boggling!” by picking up your copy today!

What Inspired You to Write Your Book?
This was my debut fantasy release and the story came to me and grew over years. It really started because I had this idea of a modern day corporate woman that when she was stressed would turn into a plant in her office. But one day at a conference, she met someone whose power had the potential to be greater. And… that was it. The story went nowhere.

BUT, there was also this very beautiful Mediterranean painting in the bathroom where I worked. I'd stare at in and look at the interplay of water, sun, cliffs, and vast skies. One day, I wondered what it would be like if my story idea was set there among those vast elements in a world made of adventures of sailing and fantastical creatures. That day, Born of Water began.

How Did You Come up With Your Characters?
Really, they come to me. My strongest characters always force their way into my psyche, fully formed… even if they might be shy telling me about who they are. Sinika in this series never shared ANY information. As he begins to outplot everyone, including me, I just had to trust he would reveal his endgame eventually. He did. I loved writing him and every one of these characters. They are so real in my head that when the trilogy ended, they begged me to write more!