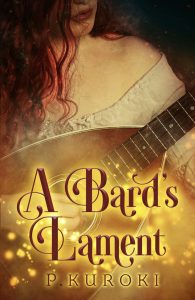 The town of Veilig is burdened with a terrible secret.

Ella is a bard, her sister a prostitute, working in a tavern to pay off their late mother’s debt. But Ella has a secret of her own. Her music carries codes for spies to decipher, working to undo Veilig’s horrific crimes.

Then her sister is taken captive. Can Ella save them both, or will their tale end in darkness?

What Inspired You to Write Your Book?
I’ve always loved bards, and I wanted to write something that’s not from the perspective of a chosen one or a hero, but a normal person trying to get by. I love a singer called Malukah, she was the main inspiration for this story.

How Did You Come up With Your Characters?
A singer I like is humble and talented, and she was the main inspiration for Ella, the main character. I have siblings of whom I’m protective, which you can see in Ella’s desire to protect her sister, Lucinda.

Book Sample
The twang of lute strings breathed life into the tavern.

The music fluttered like butterfly wings. The clinking of mugs and the low buzz of conversation quietened, as they always did when Ella played.

She plucked, the familiar scent of ale and wood on her skin, permeating her hair like perfume. Anxiety built in her chest; she glanced at the door before her gaze rested on the barkeep. Gregor stood among shelves of ale and whisky, his face half hidden in shadow. Grey eyes caught Ella’s, and though his expression was unreadable, his dark cheeks had paled to a sickly tan.

Ella plucked another string, prolonging the sonnet’s introduction for as long as she dared. “You gunna take up space all night or are you gunna play?” a gravelly voice spat from the nearest table. Ella hated it when Captain Sackle drank here. It made her insides clench, like violin strings pulled too tight. Even without his chainmail, the captain of the guard was an intimidating figure, with broad shoulders and eyes like ice. He didn’t wait for an answer but drained his mug, crimson liquid spilling onto his greying beard. Nerves bit at the young bard as bile burned her throat.

The stone was cold beneath her thighs where she perched in her usual spot. She swallowed, moistening her throat. Her lips parted. The door opened with a dull scrape. Her heart leapt. A middle-aged woman with a shock of curly black hair sauntered between the patrons. She plopped her thin elbows onto the bar and ordered a lillenfruit ale. Relief flooded Ella, and she smiled at her panic as she tucked a strand of red hair behind her ear. When she strung the first few notes, the gathering noise died back down. Ella’s voice melted away the gloom of the small pub. The woman at the bar gently tapped her fingers on the wood to the tune.

“Our throats are parched, you’re deaf to our call,
O, blessed rain, why won’t you fall?
Cursed for our sins, blasphemy, lies,
Dying and wasted, this town has run dry…”

“Where are we, a funeral?” Sackle snapped.

“Our land is dying, what have we done?
O, blessed rain, where have you gone?
Our wells have run dry, parched soil cries out,
How can we free Veilig from this drought?

“Are you ignoring me?” The captain of the guard jumped to his feet, slopping ale everywhere. A few nearby patrons exclaimed at the poor waste of drink. “I don’t pay for overpriced ale to listen to songs about doom and death. Play something else, girl.”

Ella ignored him, voice trembling. She had to reach the end.

He shoved his chair to the ground with a crash and stormed over to her. Ella reached the last line of her song and placed the lute beside her.

“Forgive me, my lord,” she said, lowering her gaze in as graceful a curtsy as she could manage while sitting. “I get so absorbed in my music that I often don’t notice my surroundings. Would you like to make a request?”

“And a free ale on the house for the insult,” said Gregor, a bottle of ale already in his hand. “Forgive the bard; she did not mean to offend you, Captain.”
Captain Sackle breathed like a bull in a rage, nostrils flaring. He wasn’t used to being snubbed. Ella lowered her gaze, her heart clenching.
“Fine,” he snarled, snatching the proffered ale and slumping onto his seat. “Sing ‘Glory.’”

Ah, yes. A song about valour and victory in battle. Everyone in Veilig knew that one. The lute strings fluttered beneath her fingers, singing of battle prowess and the might of the Veilig army, of the Mage lords that ruled over them all, and of loyalty to the mighty crown. When Ella strung the final notes, one or two regulars clapped. A few rose to donate coins with dull clinks as she murmured her thanks. When the patrons dispersed, the bard glanced back over at the bar.

The woman had vanished.