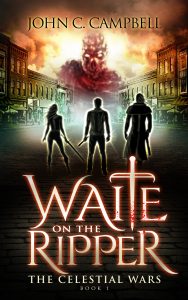 What if I told you that Jack the Ripper is a supernatural predator whose murder spree spans centuries?

Now that devil has come to Austin, and every woman in my city is in mortal peril. I’m Harmon Waite, a homegrown private investigator, and I’ve been hired to stop The Ripper, but all I manage to do is piss off that devil. As I go from hunter to hunted, I have a single chance to survive the night.

Of course, that’s when the fallen angel shows up.

What Inspired You to Write Your Book?
I like to tie several ideas together to make a good story, but the initial idea for “Waite on the Ripper” came from an article in the Austin American Statesman written back in 1888. That article claimed Austin’s Servant Girl Annihilator murders, which happened a few years before the Whitechapel killings, were actually Jack the Ripper’s doing. I read that a decade before I wrote the book, and I always thought it would make a good story.

How Did You Come up With Your Characters?
I love to write. Always have. Always will. The stories don’t stop. Pushing myself to find the best stories with the most engaging characters and the most incredible plot twists, then polishing every sentence in that story so it’s a pleasure to read, is what makes it a consistently rewarding endeavor for me.

Book Sample
Chapter One – The Murder of Jenny Summers

It was a few minutes before seven, daylight still a promise on the horizon of what looked to become a November day chilled by rain. I wheeled my aging BMW convertible out onto North Lamar, and only a few minutes later, a throng of flashing lights hove into view. They were clustered under the Threadgill’s sign on the west side of the street. Threadgill’s is one of my favorite food joints, but it was hunkered down and empty so long before the lunchtime crowd. Brief thoughts of good food and hot coffee went right out of mind as I pulled into the parking lot. In fact, I lost all appetite as I caught my first taste of a very evil vibe. It was hanging over a half-height, beat up army-green dumpster sitting like a fat toad behind the restaurant.

I couldn’t just sit there; the wrongness I felt demanded witness. I unlimbered out of my beamer and moving past clusters of flashing lights, I passed myself under yellow crime scene tape. One of Austin’s finest put up a hand to stop me, but Molly must have been watching for my arrival. She hurried over, ushered me through the small crowd of uniforms, and steered me toward the dumpster.

Then, she clicked on her flashlight and shone it over the edge. My eyes reluctantly followed the beam. Inside, a dead girl lay like a discarded doll on a pile of trash. The knot in my empty stomach gave a queasy lurch as I realized I knew her. It was Jenny Summers, the beautiful, sometimes wayward daughter of Noble Summers. Even as my mind dutifully recorded details, the unfair immensity of her death wrapped iron chains around my heart and sunk it to the bottom of the world.

I’d known Jenny since way back when she was a cute little blonde teeny-bopper, flitting past UT football meeting rooms or hanging in the background while her old man, by right of his generous donations to the program, ground out one of his infamous pep talks. Jenny had grown into a real dazzler, kind of wild the way rich girls can be. A slim, long-legged debutante, she enchanted everyone with her happy-go-lucky smile and eyes the same electric blue as her father’s. The last time I’d seen Jenny had been in a nightclub off Sixth. The missing person I’d been hired to find was sitting beside her, nuzzling her neck. The delighted, devilish grin that lit Jenny’s face when she saw me flashed through my mind now with perfect clarity. I blinked back tears, and there she was, a sad, small human form hope had deserted, but death hadn’t had a chance to claim, her face too white in the flashlight’s glare, beauty otherwise intact.

Appraising me, Molly said, “I saw Jenny hanging around the team often enough. I know you and Noble have history. You knew his daughter?”

Even as college kids, Molly and I connected on a different level. Nothing romantic, we simply understood each other. That old bond radiated anger now as Molly frowned, reached down, and lifted the blue wool evening wrap covering Jenny’s midsection. She directed her flash toward the dead girl’s stomach. Sliced from pale unmoving breasts to pelvis, Jenny’s intestines had been neatly arranged in a pile on the open cavity of her abdomen. The smell hit me, and bile rose again in my throat. I coughed hoarsely, leaning back. “Jesus Molly, give a guy a warning.” I swallowed, closed my eyes, trying to concentrate. “How long has she been dead?”

Molly moved her flashlight up to features partially obscured by disheveled blonde hair. “Her facial muscles haven’t started to stiffen. My guess is less than two hours. A Threadgill’s employee was taking out the trash, found her, and called 911. We’ve only been here about forty-five minutes.” Molly rubbed her neck. “It’s Sunday morning, so no one else is about. It looks like the murderer dumped her in the bin, then surgically gutted her. There’s no blood on the ground, but we’ll know more after we move the body.” Molly must have seen the winter in my grey eyes. She added in a gentler voice, “She would’ve died relatively quick.”

I swallowed, looked aside from that brutal vivisection, stayed focused on Jenny’s face while I struggled to regain my composure. A light rain began to fall. Jenny’s makeup distracted me as it tracked crooked lines down her empty features. I watched the last, false semblance to a living being wash away in that rain and the bleak November dawn. My few memories of Jenny alive melted into reality. This was just a corpse. Her animating soul had fled the violence and disappeared forever. I already had a strong suspicion where I fit into this evil scene, but I had to ask, “Molly, this is a police matter, why have me come running?”

Molly replied carefully, “Old man Summers was pretty broken up when I called him about his daughter’s death. He insisted I get you onto the crime scene asap, and give you every cooperation possible.” Noble Summers was the owner of a local supermarket chain and an all-around good guy as far as the UT football program was concerned. I understood why he wanted me involved in his daughter’s murder investigation. It wasn’t anything I wanted to share, so I shrugged at the question in Molly’s eyes. She raised an eyebrow but turned to Sheryl Cook, a mop-headed brunette with plain, clean features and an air of quiet competence. She was the lead forensics investigator for Austin PD. Molly nodded to her, it was time for CSI to take over.

Detective Molly O’Sullivan, freckle-skinned and red-headed, all hard lines and subtle curves, is more forcefully pretty than would be considered fashionable. She’s also a two-time State Judo Champ. I’ve been to plenty of her tournaments. Compact and tightly wired, Molly always fought with ruthless efficiency. She wasn’t mean, she just didn’t believe in wasted motions. She looked back at me now, frowned, pivoted smartly, then tossed back over her shoulder, “Come on, Harmon, let’s take a ride out to Noble’s house.”

The rain found a path down the collar of my jacket, and I felt a shiver run up my spine. Noble Summers was much like the father I’d never had. Hell, what UT football alumni didn’t owe something to Noble. Well, he’d just called in all my markers and that was OK by me. I was in, all the way in. My own anger was growing, a slow, humming, electrical resonance that crawled and itched under my skin. I took one more moment over Jenny’s body, offering up a prayer for her departed soul, then turned and followed Molly to her police cruiser. As I walked away from that empty shell of flesh, I made a promise to her memory. I’d give Jenny vengeance in kind. Her killer did not belong on this earth. I vowed to correct that mistake.