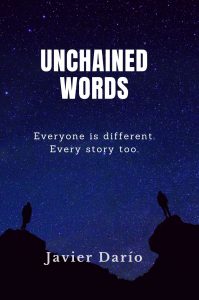 A plant with impossible fruits.
Absurd but very common work relationships.
A long-dead relationship.
An incredibly out of place feeling.
A fantastic agenda.
They are all connected by the leitmotif of this book. There are twenty stories with an appreciable thematic diversity and sometimes with a certain narrative brutality, which I hope the reader will like.

What Inspired You to Write Your Book?
I like to write about what I see. We are living in a very special moment, we have more resources and technology than in other times in the world, and yet we continue to relate in the same way as there are centuries ago, with small changes. Communications govern our lives, in theory, and the connection between us is not always made.

This is a short stories book with the common thread of human relations and the way of (not) connecting us.

How Did You Come up With Your Characters?
This is a question that is easy to answer. The characters come from many sources: situations lived by me, from scenes seen, from anecdotes they told me. IF I observe a person in a situation that strikes me, I generally imagine him as one of my characters, or as a facet of a character.
Other times, when thinking about the story, the characters are formed almost by themselves. A character from one of my last stories, I took it from an elevator ride. It's that easy.

Book Sample
THE PLANT OF THOUGHTS

At the bottom of my garden, there is a particular specimen, a plant of thoughts. I do not speak of those beautiful flowers of intense colors that are called that way, but of a plant of real and concrete thoughts that grows in my backyard.
When I was gifted its seed, I thought it was a nonsense or just a joke. I had never heard of anything like it before. However, I planted it anyways, more than anything, out of curiosity. I installed it in a convenient place of the bottom of the garden, next to the rose bushes. Over time, the plant grew. It was very pretty. It grew to the height of a small tree, with strong leaves. However, no fruit was there to be seen.
One particular day, I was sweeping off the leaves under it when I had a sudden idea, so intense I could see it like a movie taking place in front of my eyes. It was a very strong and defined idea. When it flourished, I had no choice but to make it come true, since the thought of it had the inevitable consequence of its execution, I felt it from the start. It was so natural and I felt so happy of having gone through it. Sometime after, I still had not made any relation between this thought and the plant. The thought itself is not important for this story, so I will not explain it.

That was the first fruit, and I gathered it without even knowing it.

Days went by.
A certain evening, I took a seat next to the plant while I was reading a book. Some pages later, another thought was born in me, followed by pictures and sensations so intense that I thought I was hallucinating. However, it was such a good idea and its process was so clear to me that I, again, had no option but making it come true, completely convinced about its success. Because the thought included as an inevitable consequence its execution.
I came back days later with everything related to this idea completed successfully. I felt like a genius, a brilliant mind. When I looked at the plant, I suspected it had something to do with it. It was a strange coincidence because both ideas had flourished under its branches.
I approached slowly until I was below it, staring it. There was not any physical fruit, just branches and leaves. I got even closer. At that moment, a new, very strong and clear thought began to emerge in my head. This time, the thought was not to my liking, I felt panic and ran away, scared. I did not wait for it to form completely, because I knew that thought included consequently its inevitable execution.

This was not right, I thought.
That night, I did not sleep. I was not sure about letting such a plant stay in my garden, but I realized it was unique. Then, I had the brilliant idea of cutting out a couple branches so I could make it reproduce. It would be a wonderful business opportunity!

Next morning, I took a little ax and approached it.
It was maybe my attitude or my face, I do not know. Maybe the plant was scared.
I could not reach it.
A terrible thought invaded me, ominous and unforgiving.
A thought about my own death, with the knowledge that it included consequently its inevitable execution.