You are here: Home / Fantasy / Through Hell & Highwater by Victoria Liiv 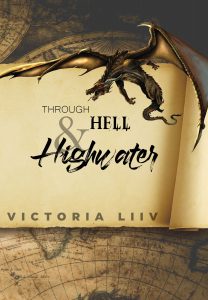 In university Volo Noscere, located in Rome, where new academic year brings forth alot of new challenges and questions. When the world becomes increasingly unpredictable, are the humans reason for it all, or is there more to it?

Evyline and Lisanna believe there must be magic behind the changes. Tylon doesn’t care about what doesn’t affect him and RocTar just wants to make it through the year without failing class.

Like it or not, they get pulled into discovering what the world has in store for them.

What Inspired You to Write Your Book?
I have always wanted to write a book, since I was a child, but I never had enough patience to finish any one of my stories. I always told myself, there is time, I'm young, I can write a book later, when I'm older, wiser and have more time. I did know I would write one eventually, though. My inspiration and commitment to this story came from a friend of mine who loves writing as much as I do. I read one of her books and came to a realization that there is no reason to stall the inevitable. Sophie and I came up with this story together and would have written in together with her too if she managed to get really busy at that time. I was already hooked, though.

How Did You Come up With Your Characters?
We worked together on the characters with Sophie. We wanted to write a story from many different perspectives and show something of every magical species taking classes in Volo Noscere university. She came up with Finley, Archer and Alfie. I am sure I took my interpretation of her imagination of the two vampires and the half-fae, but their origin is from her. Evyline, Lisanna, RocTar and Tylon were my choices for main characters, which is why they all got to tell the story through their eyes in the first book.