You are here: Home / Audiobooks / The Shylmahn Migration by David R Beshears 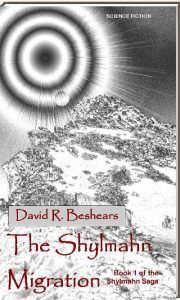 The Shylmahn Migration brings gritty realism to the nightmare of an overwhelming alien invasion of earth.

This is not ‘slam, bam, welcome to earth’ stuff. There will be no fairy dust sprinkled into the atmosphere to miraculously kill off the bad guys.

The miniseries screenplay adaptation of the novel won the Pacific Northwest Screenwriters Competition.

For the Shylmahn, it was a wonderful adventure…

What Inspired You to Write Your Book?
I grew up reading British 'end of the world' science fiction from the nineteen sixties. A common thread in those books was to take ordinary people and throw some world-wide disaster at them, and then see how they handled it. The Shylmahn Migration takes this one step further. A diverse family of grown brothers and sisters, each very different, respond to a horrific invasion very differently, though all are destined to come together in the end.

And beyond that, the story also follows several of the aliens during this… migration.

How Did You Come up With Your Characters?
I spent almost a year developing the brothers and sisters of the Britton family. I created an initial background for each, and then built upon those backgrounds to flesh out the characters. This was necessary in order to have diverse, credible characters that would respond in very real ways when coming face to face with the invasion.

I then had to do the same for the Shylmahn characters. I built the history of the Shylmahn and their planet, and from that society created the characters that would journey to this new planet, go on this grand adventure.

Book Sample
EsJen dreamed. She walked the narrow streets of home, amid the bustling crowds rushing about their early morning business, hurrying in all directions at once. Each had much to do, and what was not done now must be added to the afternoon chores, and the afternoon would be no less busy than the morning.

She stopped, uncertain, in the middle of the thoroughfare, blinking; her large, round eyes moistening. The whites held the hint of gold, the iris the darkest brown and filled with bright, gold flecks and large, deep pupils. She looked about her at the masses jostling past and realized that she had nothing to do, no place to go.

The dahlseht was home, but it had pushed her away and would have nothing more to do with her. The faces of those around her did not turn to her, and would not acknowledge her presence. Their eyes, Shylmahn eyes, with whites that held the hint of gold and irises of the darkest brown, did not see her standing there, alone and frightened, in the midst of the crowded streets of the dahlseht.

She was thin, with thin, delicate bones. Her skin was a pale gold, soft and smooth to the touch. Her hair, as with all the Shylmahn, was a shimmering golden brown. Her face was attractive; her nose, mouth and chin were fine featured; her neck was narrow and slight.

The crowds continued to hurry past her; past this frail, insubstantial figure, strangely numb now with this odd sensation of being a small child lost in a foreign land.

And no one could see her.

Looking up, EsJen saw the slate-gray sky beyond the tops of the precariously tall, narrow buildings that made up her dahlseht. Each yellowish wall was dotted with small, dark windows behind which thousands of her fellows lived and worked.

As she stood there, turning slowly, gazing at the black windows, the faded walls, the gray sky, sensing the crowds swarming around her, feeling their shadows all around, a sudden numbing sensation washed over her, through her.

She brought her gaze back to the Shylmahn in the streets. There were sounds, but they were fading away. The street noises were dying, were growing dull and distant. The people, still moving about her, were quiet now. They did not talk, but more than that, their movements, their footfalls, the noises that must be there, were not. It was quiet. It was dead quiet.

One by one, the people left the streets. She did not notice at first, but as the slow, enveloping seconds passed, the streets cleared. EsJen stretched out an arm, tried to touch one of her fellows, one of her dahlseht, but he was not there. He was there, then he had never been there. She reached out again, to another, and her hand was held out in the open air. With each desperate reaching out of her hand, EsJen grew more and more alone.

She stood then on the empty street. She took a step; the sound echoed against the walls of the canyon-like thoroughfares of the dahlseht. She turned her head and felt the slight breeze brush against her face, comb through her long, wavy hair. She could smell the walls and walks, the odor of life behind the windows.

From around one of the buildings came a shadow. A thick, green vine crawled along the foot of the building and moved in her direction, in all directions. It branched and spread, branched and spread again. Wide leaves vibrated in the ever-increasing breeze. The vines crawled up along the walls, branched into windows, curled up over the rooftops and reached across from building to building. Quickly, yet unhurried, everything was blanketed in vine and leaf.

Then… stillness. The gray sky reached down to her from the gaps in the vines overhead, creating strange, alien shadows. She was alone but for the faintest touch of the breeze on her cheeks, the slightest rustle of the leaves.

EsJen turned in alarm at a tearing, ripping sound.

Soothing warmth. She lived in warm, soothing comfort. She was held in great, unseen hands. New knowledge surrounded her, enveloped her, was absorbed by her. She closed her eyes to the tranquilizing wash that pulsed against her, seeped into her pores.

Ship was talking to her…