You are here: Home / Dark Fantasy / The Day You Were Born by Daniel Greenbrook 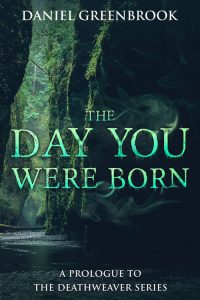 In a small, forgotten village at the forest’s edge, a half-elf warrior named Dramon watches helplessly as the birth of a child goes horribly wrong.

Dramon is used to hardship. He is a Hybrid, half elf and half human, and he fights every day to survive alongside his kin. They can count on none but themselves. They fend for themselves and often turn a blind eye to what happens around them, but not always: sometimes they hear of humans on the warpath, raiding the elven border. Those rumours they never ignore.

Four seasons past, Dramon and a few other warriors were sent ahead of time to one of these settlements: they hoped they could stop the humans.

They were too late then, and Dramon feels like he’s too late now…

What Inspired You to Write Your Book?
Throughout the Deathweaver series (both existing and future installments), the hometown of the Hybrids is brought up as an environment that changes the people who grow up there. The Day You Were Born gives a glimpse of it and gives much more context to the Hybrids, who they are and why they are who they are. As far as the story itself, the theme of birth is highly symbolic and stresses specific internal conflict within the characters.

How Did You Come up With Your Characters?
The Hybrid characters are a meld of human and elven traits. Those traits can both reinforce and contradict each other, and it was from that conflict that most of the characters emerged. The hardship in which they grew up further rounds out their personalities. Deluara, the only elf shown in the story, was at once more straightforward and more difficult to write about.
I started simple: each character was an outgrowth of its own nature. They gained life of their own in my mind while I wrote their story.

Book Sample
Dramon heard the whispers and looked up. Raising his head had never been this difficult. Relriel poked her head out of the shack's door, looking at him.
‘Dramon,’ she called, ‘I need your help.’
He rose and stepped towards her, noticing her bloodied hands. ‘As I recall,’ he said, ‘you didn't want me inside.’
Relriel glared at him. ‘I know,’ she said through gritted teeth. ‘Things have changed. I made a mistake. I never thought it could get this ugly, but it has. And now you're welcome to come in.’
Dramon looked down and felt his hands trembling. He had been insistent before and now he hadn't managed to be calm with her, but only because he was afraid. Mortally afraid. And it must have shown. He had sat there for hours and nobody had talked to him, despite them knowing what was happening. It was not like the fear before a fight, when everything that's going to happen is in one's own hands. This was different. There was nothing he could do.
Relriel walked through the door, leaving it open so that he could enter. An unsettling whiff came from the threshold. There was her smell, for one: the one she'd had since yesterday, which he couldn't remember ever smelling before. Pleasant, though strange. But then there were all the other smells, which were all too familiar. Blood, piss, faeces, sweat.
He rushed inside, closing the door behind him.
As he breathed the air of the shack, he coughed. The smell was stronger in there. The warm light of the candles gave the place a welcoming look. Dramon looked around and followed Relriel with his eyes as she went to wash her stained hands with a wet cloth. A black pot of boiling water lay beside it.
He looked to the other side, beside the bed. There she was.
‘Lara!’ he called, rushing at her. ‘Are you well?’
The elven woman was crouching down, held on her feet by two of Relriel's assistants. Dramon didn't look down, and tried not to imagine what there was either. He knelt down and tried to look into her eyes, but when he found them he saw only the void in them. Her gaze was blank and empty.
He felt his hands shake. ‘Relriel,’ he said, slowly, ‘what's happening to her?’
‘Does she recognize you?’ she asked.
Dramon took a deep breath, still seeing nothing but confusion and emptiness in the elf's gaze. ‘No,’ he whispered. ‘Does she… Does she even see me?’
‘I don't know,’ Relriel said, coming up to his side. ‘She knew who you were when you brought her here and she could make out who I was until a few hours ago, but not anymore.’
‘Why is she always blinking?’
‘The headache. The same headache she's had since yesterday, only now it's much worse. She doesn't talk now, but when she could that was all she spoke about. The pain in the head.’
‘And the child?’
Relriel stole a glance at him, a half-smile on her lips. ‘You can look.’
Dramon looked down. There was a clean, white cloth under the elf, with a few drops of liquid dotting it. He looked a little up. A head. In between Lara's legs, there was the head of the baby.
He took a deep breath. Why, why didn't that sight fill him with relief? At least the baby was alive. But no. He didn't care about her child.
He stopped his racing thoughts in their tracks. He feared how they may continue.
‘Relriel,’ he said, turning towards her, ‘how can I help?’
She sighed. ‘All I wanted was to see if she recognized you. It would be better if you went out, now.’
‘No,’ he said, barely containing his anger. He felt his blood boiling and his skin already coated with sweat. ‘Listen to me. Lara's in pain, and if you're right about all of this, then she won't survive the birth. Please, please, let me stay here and do something. I'll die too if you keep me outside, waiting.’
Relriel pressed her index on her mouth. ‘Don't scream, you're only worsening her pain.’ She looked at the elf while tugging at a lock of her own hair. ‘Fine, you can help. Take the place of one of the girls.’
Dramon hurried by the elf's side and exchanged glances with one of the women who were helping her to stand. He knew her, but her name escaped him. He looked at Lara, but once again her gaze was empty. Not even as he slipped her arm across his shoulder did she do anything, aside from turning stiff for a moment.
Oh, yes. She had done that since the day they had met.
Dramon didn't know if it was him or if it was the truth, but even in that state she still looked beautiful. Even with the streams of resin-smelling sweat coming down her face, the strange mewing sounds that escaped her lips, the long blonde hair filled with dirt and her pregnant belly dotted by her tears, she was still beautiful.
She didn't look that different from the day they had met.