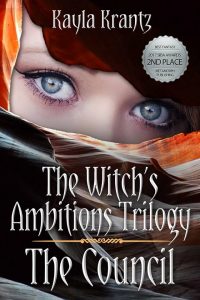 The Council is the governing Coven over the Land of Five, a region entirely inhabited—and split apart—by witches with varying powers.

Lilith Lace, a witch thought to be born powerless, happily resides in Ignis, the Coven of Fire, until she suddenly develops telekinesis, an ability only seen in some witches born in Mentis, the Coven of the Mind. She’s terrified of it, unsure who she can trust. Her best friends, Helena and Clio, are hot and cold about what she can do, leaving Lilith even more unsure about her future.

At her Arcane Ceremony, the truth comes out.

When the Council learns what she can do, she’s taken under their wing and is finally told the truth—everything she’s learned about the Land of Five, herself included, have been nothing but lies.

What Inspired You to Write Your Book?
When I got the idea for this book, it was the first time that I branched out from my genre. By nature, I am a psychological horror/thriller author. I debuted in that genre, and love it to pieces. The idea for the Council was created when I decided I wanted to try my hand at writing a fantasy book. I started out thinking of a world of witches and fairies and details grew from there.

How Did You Come up With Your Characters?
My characters came to me based on the idea of their powers. As strange as it seems, I didn't really have an idea of how I wanted any of my characters to be when I started to write. The more I worked with them, the more I began to develop personalities around their magic. Lilith, the main character, is headstrong which goes hand in hand with her telekinesis. Her love interest, Clio, is a psychokinetic which goes well with his burning compassion so on and so forth.

Book Sample
Her gaze shifts away to the path ahead as we part the foliage between the last line of trees. “That’s Crowe up there.”
I glance through the crowd to see a slim male a few years older than myself. He has shaggy red hair, some of it hanging into his narrowed green eyes. There’s a long scar running down his left cheek, ending in his cleft chin. He stands by the Aquais Equipped, taking no notice of our approach.
Being back in familiar territory, I can’t help but glance around. I search for Ignis—for Clio in particular—but when I notice him in the crowd, his gaze is focused in the opposite direction, most likely toward Helena, and I decide against reaching out. It won’t benefit either of us if I do.
I sigh, drooping my shoulders as Rayna and I come to a halt beside Crowe. He glances at Rayna before studying me with a questioning eyebrow raised. “Hello, Rayna. Explanation?”
“Crowe, this is Lilith. Lady Myrna has recruited her to our oh-so-lovely Council.”
“I’m not surprised,” he replies, giving me a gentle smile. “You have quite the reputation attached to your name.”
“Fantastic,” I mutter, shuffling uncomfortably as his words float through my mind.
“Ready for your piercing?” he asks.
I shift my gaze to Rayna, scrunching my face. “Nobody said anything about getting a piercing. T-the Sage just said I was coming to meet Crowe.”
Rayna tilts her head to the side, tapping her forefinger against her lips and returns my stare. “Those weren’t my orders.”
I take a small step backward, feeling suddenly sick to my stomach as I stare at her through cold eyes. Somehow, I would’ve felt better if they had just slapped me across the face. “You’re forcing me to join The Council? I thought it was my choice!”
“None of us got a choice,” Crowe says with an unapologetic shrug as his lip curls into a slight sneer.
He takes a step toward me, his fingers grasping into my arm. I frown at him, shuffling my cloak to pull myself free. Despite the risk of a burning execution by not following their orders, I can’t bite my tongue anymore. “This isn’t right. Don’t I get time to say goodbye to everyone before I’m permanently bound to a new Coven against my will?”
Rayna shakes her head, frowning back at me. “No, it has to be done today. Besides, it’s better this way.”
“For who? You? The Sage? It sure as Hell isn’t better for me!”
“It’ll only make things harder for you, and for them, if you get the chance to say goodbye. We can’t have you showing weaknesses either. You’re to be an authority figure now—it’s best you’re seen as such as soon as possible. Okay?” she asks, a small smile on her face as she clasps her hands together in front of her.
I stare at her with the strongest disbelief I’ve ever felt in my life. “No! It’s not okay.”
I have the urge to run again, and I wish with everything in me that I was physically capable of complying. Instead, I stand frozen in place, eyes darting between Rayna and Crowe in the hopes they’re pulling a prank on me. It’d be a cruel one, but I prefer it to the alternative.