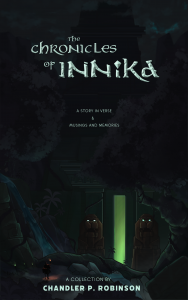 How Did You Come up With Your Characters?
Inspiration from a number of historical events and other fantasy stories.

Nestled between tall peaks that grasped the illuminated sky and the burning eye, the wonder of Man, a city unlike any other.
Bound to the mother, the immortal matriarch who planted the hanging garden without seed.
No tyrant was born, no legions were formed, no beggars to crowd the streets.
Within there was plenty, bread for the many, sweet wine without end touched warm lips.
Streets of marble, gates of gold – few so bold, as to challenge the keepers of old,
Their secrets were sung, to humble the young. Scripture of their wisdom carved in ink and stone.

Facing the North twin lions barred their teeth, as to deny lesser beasts a feast; but who dare try?
The destination of nearly all, never to fall, a refuge for the dismayed and divine.
A long road wound, through a desert uncrowned, traders bold and true. Spice, silk and herb, Beasts of burden undeterred, more than a thousand years they made their way.
Emerald fountains that spilled clear-glass nectar, unmarred by corruption and grime; a bounty of fruit on the vines.

Below the pale orb, in a sacred grove with shrine, a gathering of deceit was formed.
Words that could not fail, a torturous hail, a ruse born to foster conceit.
On the altar a lamb, bearing no soft wool, only a head of gnarled and twisted hair.
Cloaks of poxed skin, none dare hide a grin; so sure of triumph were they.
Solace undone, with the acts to vanquish and stun. Fantasies of endless cries of pain.

Rumors abound, with no source to be found, grain of death to fill pewter bowls.
Curvature of silos, countless and famed, marred with taint of lust; a thin veil of trust.
Tortured minds to lead the blind, swallowed and unsung, unleashing their poisoned creed.
Below it all a labyrinth of tombs, in which witches bloomed. Demons scratched and clawed for release from those shriveled wombs.
For even the great docks, home of gilded sails without fail, suffered all the same; the gulf ablaze.

This tale is being told to all now cast of the mould, bastards and kings, thieves and slaves.
Not so long ago, nestled between tall peaks that grasped a darkened sky and the addled eye,
The relinquishment of Man, a city of hopes and dreams.
Bound to the forsaken, the fervent tide who planted long pikes with bloodied, shrieking heads.
A despot was born, a dominion was formed, the starved and wanting prowling the streets.
Within there was exultation, reclamation for the many, the ordained that clutched cold hands.
Streets of crimson, gates ripped from bronze – all so bold, as to challenge the keepers of old,
Their secrets were buried, to cleanse the young. Scripture of their treachery excised from ink and stone.
Paradise paid the cost; Innika, lost.

Links to Purchase Print Books
Buy The Chronicles Of Innika: A Story In Verse & Musings And Memories Print Edition at Amazon

Links to Purchase eBooks
Link To Buy The Chronicles Of Innika: A Story In Verse & Musings And Memories On Amazon