You are here: Home / YA - Fantasy / The Chronicles of Agartha: Book 1 – The Green Boy by Sherif Guirguis 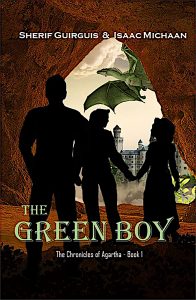 The fate of two worlds rests on the shoulders of a few unsuspecting souls.

Inner Earth, Agartha, a land where the color of your Aura defines you, losing the entire population of greens to the war left a visible void.

Ethan, a fourteen-year-old young man, discovers he has a green aura, the last of an extinct race. He leaves the school of Nafoura in search of the truth about the fate of the greens, and to find a home to call his own.

Joined by a girl from our earth, and an exiled shapeshifter, Ethan must race to the Chronicler of Agartha in search of answers.

But Ethan has a mark on his head by the very woman who decimated his people, doggedly chasing after him for nefarious reasons of her own.

Ethan must walk a thin line to get his answers, inadvertently stepping into the web of a prophecy he knows nothing about, one which may lead to salvation, or to a promise of doom for his and our world.

If you liked The Inheritance Cycle, of Eragon’s fame, you will love The Green Boy

What Inspired You to Write Your Book?
Isaac Michan my co-author had a dream of exploring Agartha, Inner Earth, part of the myth of Hollow Earth. We met online and shared the idea, and from there the story started to take shape.

How Did You Come up With Your Characters?
Ethan was conceived as an average teen boy, who takes the weight of the world on his shoulder, struck by tragedy and mystery at his young age, it was natural for him to be written as an accidental hero. As for Mara, she was to be the sound of doubt, but she grew in the telling to be far more powerful and independent. Darren, on the other hand, was written as character fraught with inner turmoil, because of the difference between his nature and his heart's desire.

When the dinner bell chimed, he headed along with the other chosen to the infirmary, to be welcomed by Master Dalmatius and Master Michael, who gave each of the chosen a blanket, a sheet, and a soft cotton sleeping gown, and guided them to choose from one of the forty beds arranged in a circle around a big metallic ball placed in the center.
Carmen was the first to ask about the metallic ball, and Master Dalmatius, cryptic as always, just said, “It is there to guard against interference in the ether,” and he said nothing more.
Eventually, every last one of the kids lay down on his or her own bed, and the porters diligently started to put out all the candles and lamps in the place, sparing only a few, which were placed near the ball.
Soon after, the sounds of soft breathing filled the room as one after another, the kids fell to sleep, but not Ethan. He was awake, wide awake, in fact. He couldn’t adjust to the change of sleeping quarters easily, as well as the lack of the usual sonorous breathing wafting to his right side from Sarah’s bed, he was missing all these small things which made his bed in the chamber, his own sleeping place.
He also had a lot of unspent energy, as well as a lot of anxiety playing in his mind. He was thinking of the Dream, and of the words the kid who disturbed him earlier uttered, thinking that some might not pass the night, and as he did this, he started to turn over and over in the bed, unable to find a resting position to feel the need to sleep.
As he turned again, Master Dalmatius was standing right beside his head, and he said to him, “Can’t sleep, Ethan?”
Ethan just nodded, and the older man reached to his head, and something cold touched his forehead as Dalmatius touched it. Within seconds, Ethan was feeling he was being pulled out of his body. He remembered Master Boyed’s words and resisted his intense wish to fight the pull, soon after, the feeling went away.
He was floating as if he was lighter than the surrounding air, which started to fog over, and soon everything around him was covered by soft clouds. He thought he saw a light in the distance and felt it was important to go where it was, so he headed towards the light, floating sometimes, and at other times walking on the soft clouds which covered everything in sight.
As he came close to the light, he noticed it was some kind of huge candle, and next to it stood a woman who was dressed all in green, and a man who was very tall and made entirely of shadows, or maybe he was the shadow of a hidden man.
Something screamed in his head to run, but he pushed forward, trying to see the faces of those two people. As he came nearer, he realized both of them were trying very hard to extinguish the candle, but for the time being, they were failing.
Suddenly, they noticed him, and the woman produced a strange growl from her mouth and gave pursuit, so Ethan had no choice but to run, to flee away from her. He didn’t know for how long he had been running, or if the woman in green would ever stop chasing after him, but he felt tired and scared, and as he went on, he felt the woman gained on him, he could almost feel her breath on his neck.
As he was about to fall out of tiredness, a very strong light rushed towards him, then past him to the woman in green, and for a moment, the whole world went silent as if in anticipation.
The light materialized into the form of a man, but just like the shadow man, Ethan couldn’t really be sure if he was even a man.
The woman in green jumped at the man of light, screamed and vanished, then the tall shadow man came bounding to where Ethan lay on the ground, and the man of light stood above him.
A great fight ensued when the shadow and light man met, Ethan could see sparks, hear thunder, and the whole world shook around him.
The light man looked like he was about to lose as he fell to one knee, so Ethan rushed at his side, and he felt the pull on his body even stronger still, but the man of light stood strong once more in front of the man of shadow.
Then something strange happened as the man of light started to melt as well as did Ethan, and both became one.
Suddenly, Ethan was whisked out of the entire scene, into the grounds of Nafoura. His heartbeats raced and pulsated in his head and in his ears, but he knew the Dream was finished, and now he had the night to himself.
He tried to open his eyes and shake the sleep off, but couldn’t, and eventually, he even forgot he was dreaming as he joined Malik and Sarah, competing for the best archer of the three.
The rest of the night was just like any other night for Ethan in Beimini, peaceful and serene.

Links to Purchase eBooks
Link To Buy The Chronicles of Agartha: Book 1 – The Green Boy On Amazon