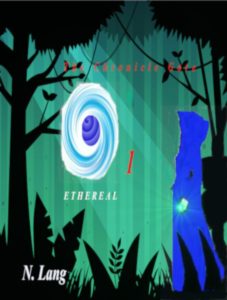 How Did You Come up With Your Characters?
When I was in Jujitsu at twelve, I remember seeing kids as young as five years old taking lessons so drew and mixed from those experiences. But instead made my characters around seven and eight.

Book Sample
The light of the sun stayed away from the forest, as if it knew something evil lurked within. Taylinn stared across the border of the meadow, into the shadows of the woodland from the play yard. First the cloak one’s save me, then they try to hurt my sister? Are they working with that Malic? Is Sinya sent here to aid Malic too?
A soft scuffing came up behind. Instinctively, she knew it to be her sister.
“I’m glad the weekend went by fast,” Avigale said. “I don’t think I could take Sinya’s singing more than a couple of days.”
“I don’t think I could take the shrieks of Sinya at night.” I’m also glad Mom believed that Sinya and I fell into the river. You know what that sound was? That horrible sound that came from the trees. Don’t you?” Taylinn vaguely heard her friends laughing and playing in the field behind them while Avigale now stood beside her.
A cool wind brushed past causing their cloaks to pull at them. “Daddy’s in danger. Someone’s after him. Someone named Malic.” Taylinn looked toward Avigale who rolled her eyes. Taylinn crossed her arms. She doesn’t believe me, of course.
“How do you know this, Tay?”
“I saw him in the forest fighting Nimus,” Taylinn said.
“Fighting?” Avigale asked. “I thought they were friends Besides fighting is against the Fay Goddess law.”
“To protect us. This Malic threatened to hurt us if Dad doesn’t do what they want. I spied on him in the secret passage and heard Malic wants Dad to finish a job he started with him, but Dad doesn’t want to.”
Avigale sighed. “Let’s say this crazy Malic exits, I assume Mom knows nothing about this?”

Taylinn shook her head. “We need to keep it that way. We don’t want to worry her.”
“I still don’t believe someone would be after Dad,” Avigale said.
Taylinn scowled at her. “Still think it’s all my imagination?”
“Well, you do have an active imagination.”
“How do you explain the thing that attacked you?”
“It might have been a big bird. Other than that, I can’t say.”
Taylinn shook her head. “What if the human’s been right, and it is a Mer-Dragon?”
The air turned colder. “Careful, you’re beginning to think like him,” Avigale turned. “Don’t want to be kicked out of school like he was, do you? We can discuss this later. Come on, let’s play. Unless you want to waste free time.” Avigale ran back down the hill.
Taylinn was about to follow when she spotted a gray being in the grass. It then ran across the glade. The grass whistled when she trailed on all fours after it. Unlike the blue cloak being that ran on all fours, this being ran on two, like the human. Taylinn, now just inches away from the stranger in gray crossing into the void of trees. They ran deep into the forest. Taylinn leapt on top of the cloak one and held it to the ground. She reached for its hood when Taylinn spotted something silver on its finger like a ring. A swirl of mist encircled them rendering Taylinn helpless to see. Even with her extra eyesight. Taylinn felt the stranger buck her off on to the ground. When the smoke cleared, it was gone.
“Who are you?” Taylinn shouted at the forest. A single tree responded with a slight shake of its leaves. Looking at the tree where the purple leaves fell to the ground, she tried to find the cloaked one, but it was not there or invisible somehow. “Are you the one that spilled blood on our planet and hurt my sister? Did you know blood is forbidden here?”
Taylinn was met with silence. Then a female voice replied. “We know all about the planet and its laws little one.”

“What are you up to? Why don’t you show yourselves?” she asked the trees again. “What’s going on?”
“We are not permitted to say. It’s for the best,” she said.
They didn’t say anymore. A vast wind pressed Taylinn’s cloak around her body, she knew a storm approached and she headed back pulling her cloak tight around her neck.
Taylinn headed back to school. She stopped and listened to the other kids still playing. She wasn’t surprised that Avigale didn’t come after her this time. Looking at the sun she guessed she still had a half hour before Mr. Grey brought the kids back inside the classroom. Could Nimus tell me anything about the cloaked ones? She ran over to the bush where the entrance to the community laid. She took off her cloak, so it wouldn’t get muddy. Taylinn dropped into the hole.
She turned down the stairs that led to the lower level then zoomed past adults and kids. They all watched her in alarm, jumping out of her way. “How rude,” an old Elousen said.
Zooming through the hallways that led to Nimus’s office she finally reached the closed door. Trying to catch her breath, Taylinn knocked. She heard nothing except for her breathing. After a second time of no answer, Taylinn opened the door to darkness just like the hall. Not even a lit candle. Her eyes adjusted due to her inferred eyes when she closed the door, causing a soft glow everywhere she looked. Over on the table she found a book lay opened to a page. Glancing at the book’s cover she saw, a picture of a vehicle she had never seen before with a title that read “Manual for repairing ships and flight guidance.” She turned to the table of contents and read: “Introduction to first ship and how to fly standard.” Her ears twitched nervously to two voices. One was Nimus but the other belonged to her father. Both coming down the hall. Taylinn didn’t want to explain to her father what she was doing here
during school hours, so looking around for a place to hide she went behind some pile of books and peeked between them. Her father and Nimus opened the door, “…Yes, I really do think
the water system is ready for everyone in the community. Now we have to find a way to hook it up to those who live outside like my family and Karla’s family.” Jasper gave a sigh “My family will need it when I’m gone.” Jasper whispered then chewed on his pipe.
Nimus’s stick tapped on the floor. “I will see they are provided for. You know that.” The tapping of the stick stopped. “The ship is almost restored. Only minor things to fix now.”
“Good, good. Oh, and we need to make sure the paneling protects from re-entering.” Her father tapped on something. “I may need this book to refresh myself.”
“Then it is yours. I have a copy. You think it wise not to let the members know the real reason you are going?” Nimus asked, concerned.
Her father was silent for a while. “We must keep the truth secret. If they knew we weren’t only looking for a planet, they would tell everyone, and we would lose their trust along with the whole communities.” Turning toward Nimus he added. “I feel sorry for the human.”
“You leave the human to me. You have enough to deal with at hand.” Silence lingered in the room. “If only things were different. We could have—”
“—What is taking so long? You would think your family’s life would be more important to you than your showing.” It was Malic’s voice. The last time she had heard the voice she was in the cave eavesdropping while Malic spoke to her dad through the computer. But she couldn’t see Malic. She guessed he stood behind Nimus because her dad narrowed her eyes toward Nimus.
“It was you that attacked my daughter in the forest. Not that she slipped.” His voice tried not to shake. “You won’t get away with this!” her father shouted. “You know how to protect them. I
sent you the cordnates where the disk might be. Next time I might hit a bull’s-eye.” Malic laughed.
“I told you before to leave my family out of this!” her father shouted.
“Wouldn’t want them to find out about your past,” Malic said, with a menicing voice.
Taylinn listened to silence from the room. Malic must have left. “I want the ship ready, Nimus. I must leave as soon as possible.”
“It will be. The meeting is about to begin.”
Taylinn heard the tapping of the stick and feet scuffing. Then the door closed.
Her ear twitched to a low rumble sound and a chill came from behind her. Turning, she spotted an opening in a brick wall in the back. Taylinn grabbed the edge of the wall and pulled really hard to open it. Stepping into the space she found steps leading down to complete darkness. What is this place? As she took a step down, she remembered she’s supposed to be in school.