You are here: Home / Fantasy / The Bound Legacy by E.G. Bateman 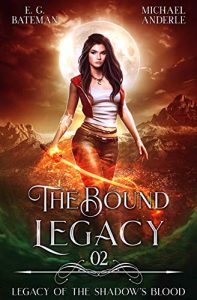 The Bound Legacy by E.G. Bateman

Lexi and the team take a well-earned break in New Orleans while she follows the trail of her forgotten past.

But when a resurrected voodoo queen goes on a killing spree and tensions between the city’s vampire factions escalate, Lexi is reluctantly drawn into a new investigation.

For once, Lexi would welcome Kindred’s involvement but they are suspiciously absent.

When they finally return to the Crescent City, they bring with them startling secrets about Lexi’s past.

Scroll UP and click Read Now or Read for Free to Join Lexi, Dick, and an unforgettable cast of characters in the first book of this addictive new series.

Note: This book was previously released as part of the Legacy of the Shadow’s Blood.

Author Bio:
E. G. Bateman began writing her first book, Fade, in 2014. She put it aside several times before finishing it in 2017. Book two of the Faders series, The Network, was published in 2018 and book three, Portal, in 2019. she is currently working on a new series but there will be more to come in the Faders series.

She lives in England with her husband, son and dogs. She likes the idea of going to the gym but prefers eating chocolate and binge-watching TV shows.