You are here: Home / Fantasy / The 19th Bladesman by S.J. Hartland 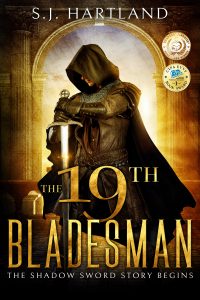 HIS DUTY IS TO DIE YOUNG, BUT FATE HAS SOMETHING FAR MORE LETHAL IN MIND…
If Kaell breaks, the kingdom breaks with him. And prophecy says the 19th Bladesman will break…
THE BONDED WARRIOR…
Kill. Die young. That’s what a swordsman bonded to the ancient gods does. Without expecting praise from the man who trained him to survive this centuries-old, malignant war against the inhuman followers of an invincible lord. But Kaell wants more. More of Val Arques’ attention, his approval. Just more.
THE FIRE DANCER…
Ice lord, spy, Heath never loses a fire dance. Yet he longs to know that thrill of danger down his spine as he kills for his god, to fight a warrior who might, just might be better than him.
THE BROKEN…
Val Arques is a bladesman of formidable power entrusted not only with Kaell’s life but with the truth that will destroy him. Banished to a grim outpost of this doomed kingdom of sorcery, poetry, and treachery, he cannot afford to care about the young warrior. For love means loss. And Val Arques has a shameful secret …
A KINGDOM ON THE EDGE OF CHAOS…
As a vengeful god escapes his ancient prison and draws Kaell into his web of deception, even Val Arques can’t protect him from the dark prophecy awaiting him. Because you can’t flee fate unless you’re willing to do the unthinkable.
Duty and love collide in this powerful epic fantasy about shattering loss, betrayal and the price of power.

What Inspired You to Write Your Book?
I love sharing the stories going around in my head. I often start with a fragment of an idea and then see where it goes. In The 19th Bladesman, the initial idea was, what if you had to kill a stranger to save someone you love, but the person you had to kill protected the realm. It moved on from there to become a story about dark plots, dark magic, and characters with even darker secrets.

How Did You Come up With Your Characters?
Sometimes they start with just a name. I have a new series, which started with the name of a character. The question became "what does someone with a name like that do?" And suddenly the whole character unfolded as if from nowhere.
Sometimes the character seems to grow out of the plot.