You are here: Home / Archives for booknerd 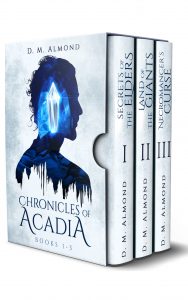 All they wanted to do was save the kingdom…

Now Logan Walker finds himself on the run for a murder he did not commit.

Corbin Walker has been charged with capturing his fugitive brother and bringing him to justice.

Elise Ivarone has been thrust into the role as village leader during dark times. She will give everything to keep her people united and shelter them from the coming storm.

Together they will be forever changed as they uncover the lies, deception, and brutality of their world.

For the first time ever, Books 1-3 of the Chronicles of Acadia are bound together in this special omnibus edition, with bonus content including the Author’s Foreword, a new fully-detailed map of Acadia, and a special three book appendix.

“With incredible characters and great battle scenes, it will keep you spellbound until the last page.”

“…As with the previous book, the payoff is at the end when it all comes together with excitement and action, and all the pieces fall into place to make an intriguing conclusion.”

This set contains three books, new artwork, and a world appendix:
Secrets of the Elders
Land of the Giants
Necromancer’s Curse

What Inspired You to Write Your Book?
I started putting the stories in my head to paper the day after I was hit by a truck. We were incredibly lucky to walk away from that accident and it gave me a serious kick I needed to get going.