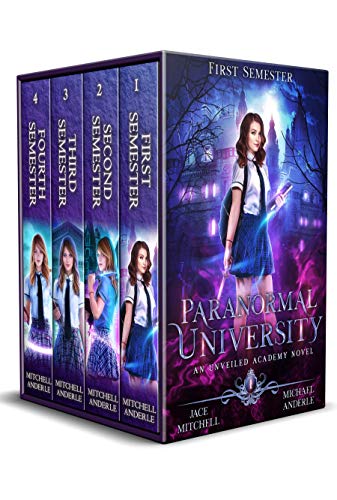 Claire just received her letter of acceptance despite the fact that she didn’t apply. Why does the university want her?

Because ghosts, vampires, werewolves, elves, dragons…They exist, and more are crossing into our world every day. The problem? Many of them want to kill us.
Claire has a rare ability to actually see these creatures. See? Heck, her best friend is a drunk leprechaun.

Coming from a small town, Claire thought her future prospects were flipping chicken at the local fast food joint. Now she’s traveling to Boston, where she’ll learn how to fight this ‘mythological invasion’. She never thought she’d be in a class called Vampires 101 but…

Claire’s a soldier in this new war – she will be humanity’s most dangerous asset.

And if Claire and her classmates fail? If they don’t learn fast enough and fight hard enough?

Well, graduation won’t matter too much when the world is reduced to ashes.
Second Semester:

The Veil is still tearing.

Which means for Claire and her friends, class is still in session.

Spring has arrived and everything appears calm. Claire and Marissa are studying. Jack is flirting with the new female students. It’s beginning to feel a bit like…well, college.

On the coast of Florida, evil is brewing. Something far worse than vampires, and something much harder to fight.

Claire is in the calm before the storm, because she will be tested like never before. A choice is coming…

Or save her friends.

First there were vampires.

Claire and her classmates are hoping for a peaceful summer semester. Claire just wants to rest. Jack wants to get to know the new girl, Samantha. Marissa is still concentrating on learning her spells.

That’s all before the largest tear yet rends the Veil. It hangs in the sky for days, and everyone wonders what is crossing over.

A Myther unlike any yet imagined.

Everything Claire has trained for—all her skills—might not be enough to defeat this immortal creature.

And if she fails?

No one on Earth will have to worry about classes ever again.

The gods started the war…

…Can Claire end it?

Hades escaped their last confrontation, and now his whereabouts are unknown. He isn’t dormant, though, because the Veil is tearing faster than ever before.

And the things crossing over are a lot less friendly than leprechauns. Think Godzilla.

Some say the only way to stop it is to head to the other side of the Veil. They say Claire and her group needs to fight the Mythers on their turf.

Is the end of the world as humanity knows it here?

Or will Claire find a way to stop these gods before it’s too late?

Grab this urban fantasy thriller today, because you will love the tension in this exciting boxed set.

Author Bio:
Jace Mitchell is an Amazon best-selling author of fantasy novels. He lives in Key West with his dog, and when he’s not writing, he’s enjoying a cigar and scotch.