You are here: Home / Fairy Tales / No Bed of Roses by Alannah Foley 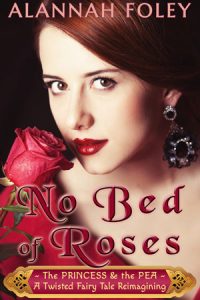 Dastardly deeds meet love, hope & humour in this fairy tale reimagining of The Princess & the Pea…

Frustrated by her commitment-shy son Romeo pulling out of yet another wedding, Queen Daphne finds a last-minute suitor. But will he land that first kiss and decide she’s not the one, or will they find their Happily Ever After?

The queen of Dalmashia is at her wits’ end. Just days before he’s due to marry, her son Prince Romeo changes his mind, leaving the nation high and dry. This is the third wedding he’s pulled out of, and if the queen doesn’t do something soon, her subjects will lose confidence in the crown.

As luck would have it, the palace housekeepers find a last-minute suitor. And after the girl’s royalty is verified with a special pea-under-the-mattress test, the queen is left with just one problem…

Every time her commitment-shy son meets a match, he feels compelled to test the relationship with a kiss – and inevitably, he decides she’s not the one.

So when Romeo is captivated by the beautiful red-headed Rose, the queen’s not taking any chances. She requests that Rose not kiss Romeo before the wedding, and she vows to hold her resolve. Unfortunately, despite a similar promise from Romeo, he’s less enthusiastic – and he has some dastardly ideas about how to manipulate circumstances in his favour, too.

Will the queen’s attempts to pull off a joyous royal wedding be in vain? Or will the couple find their Happily Ever After?

Find out in No Bed of Roses, a twisted fairy tale reimagining of The Princess & the Pea.

ABOUT the Author’s Fairy Tale Fiction

If you love stories with a blend of adventure, humour, romance, and a touch of magic thrown in, then the author’s fairy tale-inspired fiction is for you.

Written for adults, stories often call into question the ‘facts’ of the original tales. So whether you’re reading a reimagining of a tale or an imagined sequel, it’ll come with some intriguing twists.

Featuring strong female leads, each story has a flavour all its own, with varying shades of light and dark, and is set in a shared world, on the same continent, with the notoriously dangerous Dark Heart Forest at its centre. And although they can be read as standalones, you may spot a few overlaps with characters and places.

Books are written in British English and contain no sex or swearing. However, there may be occasional violence or content not suited to children.

So… ready to read No Bed of Roses?

What Inspired You to Write Your Book?
One of my favourite fairy tales when I was young was The Princess & the Pea. The idea that a single pea felt under so many mattresses could be an indicator of someone's regal status is a rather intriguing one, and in No Bed of Roses, a young suitor to the prince (named Rose) is put to the test and passes with flying colours. I love turning things on their head in my books, so the question is: are things really as they seem?

How Did You Come up With Your Characters?
As this story is based on the Princess & the Pea fairy tale, there were already a certain amount of characters that 'had to be', such as the queen & prince plus the suitor princess. However, I love to give myself the freedom to change things with my fairy tale-inspired fiction, so I added a father and a few other characters – for reasons you'll understand when you read the book.

I named the prince Romeo to add some 'texture' to his character, and I wanted his mother, Queen Daphne, to be a strong woman – so the two play off each other nicely.

Romeo's eyes narrowed as he watched her leave. You're not the only one who can throw their toys out of the playpen, Mother, he thought. Two can play at this game. He glanced down at his pitiful, crumpled bow, jaw clenched. And if you think I'm marrying that wretched whistleblower, you've got another thing coming.