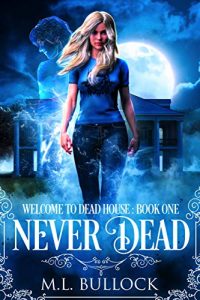 “Why does the ghost have his head in the oven?” I groaned at the sight of Joey’s bony ass sticking out of the appliance. He hadn’t even opened the door.

Her best friend died and leaves her as guardian to a teenager. Now, not only is Tamara struggling with her new role but she is also charged with caring for the family home, the Ridaught Plantation known by the locals as the Dead House.

To her surprise, the place is already occupied by an angsty ghost named Joey who has a penchant for wearing her clothes and a fascination for paranormal movies and television shows. Tamara and Joey develop an unexpected friendship but questions remain about how and when he got there.

In an attempt to fit in with the suspicious small town residents, Tamara turns on the charm and decides to host a community wide Halloween party, right at the historic home.

Everything turns out great until the dead begin to show up too.

Can Tamara solve the secret of the Ridaught Plantation before it’s too late?

Can she protect Chloe from the dead who are assembling?

Or will they also become ghostly residents of the Dead House?

Author Bio:
Author of the best-selling Seven Sisters series, M.L. Bullock has been storytelling since she was a child. In fact, she was a quite an excellent liar and decided early on that she’d rather live in her own head than the real world. Born in Antigua, British West Indies, she has had a lifelong love affair with haunted houses, lonesome beaches and forgotten places. She currently lives on the Gulf Coast and regularly haunts her favorite hangout, Dauphin Island. A visit to Historic Oakleigh House in Mobile, Alabama inspired her successful supernatural suspense Seven Sisters series.