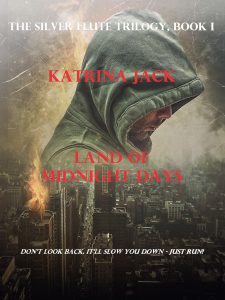 The City is a dark and dangerous place but amongst the desperation and despair there is a ray of hope, weak and insubstantial, but with the potential to light up the world.
Jeremiah Tully has a single joy in his life – the silver flute his mother left him. Mute from birth, the flute is his voice; but the mystery of why his mother abandoned him is left unanswered. Isolated because of his disability, and his mixed-race heritage, he struggles to find meaning for his existence.
The metropolis is awash with demons and other horrors, can he drive them back – would that gain him acceptance? The silver flute is inscribed with the musical notes of a powerful melody that could be used as a weapon against the invaders – but there’s no guarantee that it will work.
Then one day a stranger comes into his life and all hell breaks loose…

What Inspired You to Write Your Book?
I used to work in a call centre and my desk was next to a huge window that overlooked the iconic art-deco Littlewoods building, on Edge Lane in Liverpool. In between calls, I would gaze out at the building and one day it struck me that it would make a great location for a story. I developed the idea further, over a number of weeks and hence, The Land of Midnight Days was born.

How Did You Come up With Your Characters?
I'm a great fan of 70's rock group, Jethro Tull, especially their lead singer, Ian Anderson, who is also well known as a flautist. I was listening to one of their albums one day and inspiration struck and the main protagonist popped into existence. I named him Jeremiah Tully. He evolved into a flute player, who not only plays the flute, but also uses it to express his feelings, as he is mute and cannot communicate verbally. The rest of the characters evolved around him and I soon had a full "cast" with which to people my imaginary world.

Book Sample
Don’t look back; it’ll slow you down – just run!
The city had become the worst of urban jungles. Hunters ruled unchecked as Jeremiah Tully, running for his life, could testify.
He fled down yet another street and saw a small crowd ahead, gathered around a figure standing on an upturned crate. He came to a halt, unsure which way to turn.
Raising his head, the man brushed his wild, bushy hair back from his unshaven face and began to speak. ‘Brothers and sisters,’ he intoned, arms raised high, ‘join me in my cause to rid this place of impurity. Let us drive out the iniquitous and send them back to their holes and dens.’
A poster had been hung on some nearby railings. Black letters on a white background blazed a message of hate:

Free the city of impurity; drive out the lower races.
Unite in a glorious cause to restore our freedom!

That the speaker was demon-possessed was in no doubt. Nonetheless, the crowd hung on his every word.
The sound of running feet echoed along the pavement and a quick look around showed a group of youths racing towards Jeremiah. Blind panic rose until he spotted a fire escape attached to the side of an abandoned warehouse. He hauled himself up, hand over hand, feet slipping and sliding on the wet metal steps. At the top he paused and hunched over, struggling to get his breath back. His damp hair clung to his head and his heart hammered against his ribs.
‘There he is!’
His pursuers were still after him. With a sound of despair, he fled.
Coils of wire, broken packing cases and old pipes lay strewn across the flat, waterlogged roof. He wove his way between the rubbish until forced to halt at the parapet on the opposite side. A pair of rusty metal bars clung to the brickwork; the rest of the ladder had fallen away. Some fifty metres below, the ground seemed to rush upwards. He lurched back, fighting off an onslaught of vertigo. There was no point in calling for help. Even if he’d been able to, no one would answer.
Metal clanged, wood snapped and boxes flew, as the pursuers kicked their way through the litter. One of them yelled, ‘Come on, we’ve got him!’
Jeremiah looked over at the adjacent building and tried to gauge the distance – maybe three metres.
His pursuers were gaining on him. He snatched up a piece of pipe and then hurled it at the nearest. It caught him across the midriff and he went down, taking two others along for the ride. Their tangled bodies forced the rest to pull up.
‘You stupid sod, what d’you wanna do that for!’ one of them snarled at the man who’d caused the pileup.
A second glance at the other warehouse told Jeremiah he had no option. He backed up a little and then raced forward. When his feet hit the edge of the roof, he pushed off into space. He overshot the ledge of the next building and landed hard. Winded, he curled into a foetal position.
A string of curses drifted from across the way and he forced himself to look up. Gathered at the periphery of the roof he’d just leapt from, the gang continued to rant and threaten but didn’t dare follow.
Ever since he’d left The Crack o’ Dawn pub, they’d chased him through the dark narrow streets, determined to bring him down. His pursuers were Wannabes, members of a fraternity dedicated to the destruction of those who were different; and he was that all right. Not only did his ancestry include that of the last of the magical races, the once nomadic tribes of Elwyns, but he’d compounded his felony by being half-human as well. Not that the Wannabes were aware of that. All they saw was an Elwyn, with pale skin, silver eyes and slender-than-usual build.
Jeremiah shrugged off his leather backpack, took out a bulky pouch, opened it and stared at the gleaming contents.
Thank God it remained undamaged.
Ignoring the stream of abuse, he replaced the pouch in the bag and then ran off into the darkness.